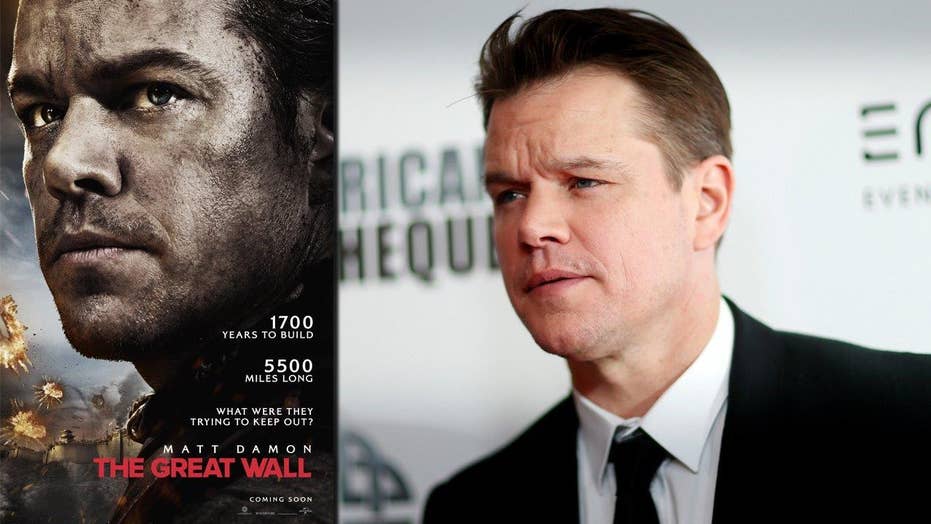 Matt Damon criticized "outrageous" stories in the era of fake news as he responded Tuesday to accusations that his role in the new China-Hollywood co-production "The Great Wall" should have gone to an Asian actor.

Some critics have said Damon's casting as the lead character amounted to "whitewashing," in which Caucasians are chosen for roles that actors of other ethnicities should play.

In an interview with The Associated Press, the American actor said he thinks of the term "whitewashing" as applying to Caucasian actors putting on makeup to appear to be of another race, as was common in the early days of film and television, when racism was overt.

"That whole idea of whitewashing, I take that very seriously," Damon said, using the example of the Irish-American actor Chuck Connors, who played the lead character in the 1962 film "Geronimo," about the famed Apache chief.

The movie's trailer sparked criticism in the U.S. that a white man had been chosen to play the lead in a film set in China meant to showcase Chinese culture. The furor came amid other accusations of a lack of diversity and opportunities for Asian actors in Hollywood.

Damon questioned whether the critical stories on online news sites based on "a 30-second teaser trailer" would have existed before the era of fake news and headlines designed to make people click on them.

"It suddenly becomes a story because people click on it, versus the traditional ways that a story would get vetted before it would get to that point," said the star of the "Bourne" franchise.

People fall for outrageous headlines, but "eventually you stop clicking on some of those more outrageous things because you just realize there is nothing to the story when you get to it," Damon said.

Damon and Zhang told the AP that because of the demands of the story, Damon's role — a mercenary who comes to China to steal gunpowder — was always intended to be European.

Damon said he thought the criticism over his casting would subside "once people see that it's a monster movie and it's a historical fantasy and I didn't take a role away from a Chinese actor ... it wasn't altered because of me in any way."

The film is the first Sino-Hollywood co-production and first English-language film for Zhang, the director of the romantic Kung Fu drama "House of Flying Daggers" and the opulent opening and closing ceremonies of the 2008 Beijing Olympics.

In the movie, China's Great Wall has been built to keep out menacing, otherworldly creatures. The use of monsters and a hero saving the world are very much Hollywood techniques.

Zhang told the AP that the script took Hollywood seven years to develop. "Although it was developed for commercial purposes, I felt there was room for me to play and put many elements of Chinese culture into it," he said.

Most Chinese co-productions with the West have been box-office flops, but producers hope "The Great Wall" can show that big-budget Sino-Hollywood co-productions can work.

Hollywood is eager to work with Chinese actors and producers to appeal to the Chinese cinema-going market, which is expected to outgrow the current No. 1 market, North America, within the next two or three years. The Chinese government has long sought to project cultural influence abroad and hopes that "The Great Wall" will be an international blockbuster.

The film debuts in Chinese cinemas on Dec. 16 followed by other countries, including the United States in February.