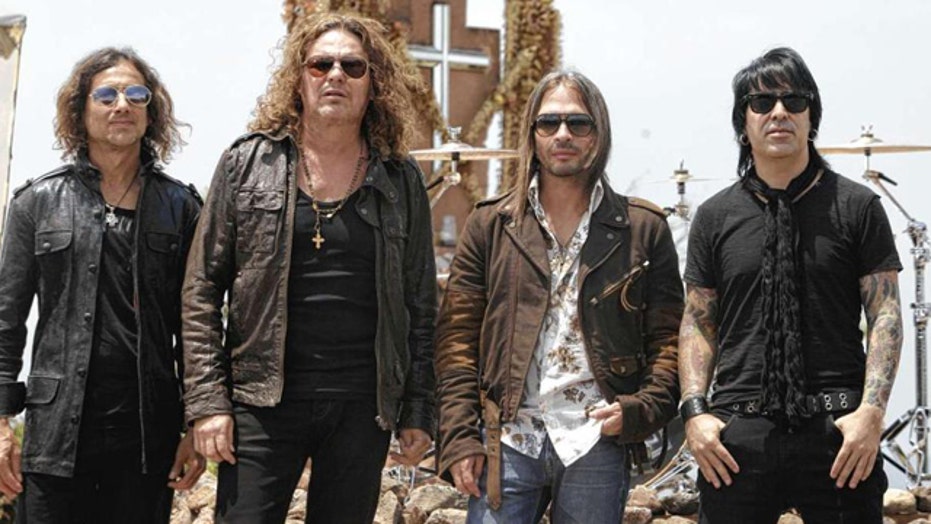 Latin America's most successful rock band speaks out against corruption

Latin America's most successful rock band, Maná, is 'very concerned' with recent political upheaval and corruption in Latin America and is encouraging people to continue to protest and to fight for human rights.

"We are drowning in corruption in Latin America, it brings us a lot of sadness," Fher Olvera, the lead singer, said Thursday at a private concert hosted by Chivas Regal at the famous Apollo Theatre in New York City. "Especially, what’s happening in Venezuela...Normally, we don’t want to be so political, but sometimes it’s inevitable."

Corruption in Latin America has grabbed headlines all over the world in the last few months.

In Mexico, there is outcry against a corrupt government seen as responsible for the disappearance of 43 students in Iguala in September. In Venezuela, President Nicolas Maduro's socialist regime watches over as its economy collapses and the U.S. declares the nation a national security threat. In Argentina, a suspicious murder inflamed allegations that the nation's President Cristina Fernandez de Kirchner worked to cover-up Iran's involvement in a 1994 terrorist attack in Buenos Aires.

"We are just very concerned, you know, how the situation not only in Mexico but all over Latin America. Corruption is the cancer of Latin America," said Alex González, the band's drummer, to Fox News Latino. "We are having a lot of issues in our country, in Mexico, but I think the important thing is that people have a voice and social media is very important to denounce all those violations, human rights."

He said there is little the group could do – but they do want to use their powerful voice for the greater good.

"All we can do as a band is just tell people to go out there and protest freedom of speech and we have to denounce anything that we see that's happening here in the United States, Latin America, and all over the world," González said.

Olvera said even their new hit song "Mi Verdad" or "My Truth," featuring Shakira, is a message to corrupt government officials that have taken hold, particularly in Venezuela.

"‘Mi Verdad,’ if you listen to it, we talk about lies, and we talk clearly about the lies of dictators and government officials that trick us. It concerns us," Olvera said.

"Mi Verdad" is already a massive hit with over 20 million views on YouTube. It made its debut No. 1 on the Billboard Hot Latin Songs on February 16th, and remains in the top 10.

"It’s the first opportunity we’ve had a chance to collaborate with a woman," Gonzalez said. "All of our past collaborations in the past have been with men, male artists that we admire, and very famous people. Well, when the possibility arose of working with someone on the new song, Fher had the idea of contacting Shakira, and today there’s no bigger female artist in the world than Shakira.  It was really great having her. And the combination of the voices between Fher and Shakira and the harmonies, it came out really good."

Maná is set to debut their new album, “Cama Incendiada" or "Burning Bed," on April 21st, and is set to embark on a U.S. tour beginning in June.