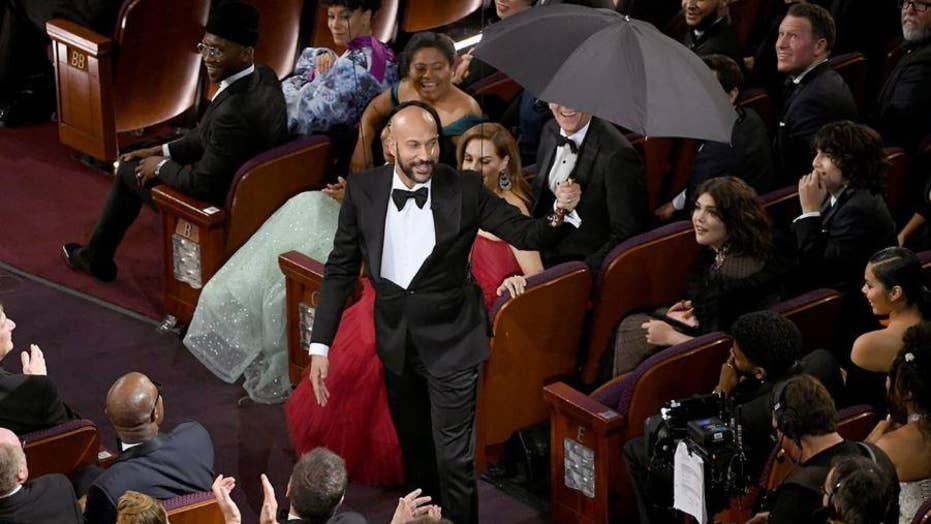 Keegan-Michael Key dove into the 2019 Oscars from above, clutching a floating umbrella in tribute to "Mary Poppins" — and possibly in mockery of President Donald Trump.

At the end of Key's entrance, which was to present Bette Midler's performance of "Mary Poppins Returns" song "The Place Where the Lost Things Go," he ditched his large black umbrella instead of closing it.

OSCARS 2019 RED CARPET: WHAT THE STARS ARE WEARING

It evoked memories of a viral moment from October 2018, in which Trump appeared to have little luck closing his own large black umbrella on his way to board Air Force One.

OSCARS WITHOUT A HOST KICKS OFF WITH QUEEN PERFORMANCE, TRUMP JABS

Trump's viral moment occurred after he gave a speech about the shooting at Pittsburgh's Tree of Life synagogue.

One user posted a clip of Key's grand entrance, writing, "Keegan-Michael Key is as hapless as Trump at closing an umbrella."

"Keegan Michael Key shades Trump by ditching an umbrella that he can’t figure out how to close!!! Hahaha," another user wrote.

"The brilliant Keegan-Michael Key trolls Trump's umbrella faux pas during the #Oscars," another wrote, accompanying the tweet with a GIF of Trump's poor handling.

Another summed it up as, "Keegan Michael Key trolling Trump was 100 #Oscars."

It wasn't the only Trump diss of the evening.

Earlier in the show, Maya Rudolph told the crowd, "So just a quick update in case you're confused. There is no host tonight, there will be no popular movie category and Mexico is not paying for the wall."