Rapper Kanye West met with President Trump at the White House for a free-wheeling discussion.

The year has changed. But the politically incendiary Kanye West? Perhaps not so much.

The rapper, who said just months ago that he'd be "distancing" himself from politics, jumped back in with a tweet on Tuesday that reaffirmed his support for President Donald Trump.

"Trump all day," West wrote as 2019 was getting underway.

"One of my favorite of many things about what the Trump hat represents to me is that people can’t tell me what to do because I’m black," another tweet read. "Blacks are 90% Democrats ... That sounds like control to me," read another.

In a follow-up tweet, West simply stated, "2024" — a possible reference to the presidential election to be held that year.

In October, the outspoken Trump fan said he'd had enough of politics. West told his Twitter followers that his "eyes are now wide open" after he felt he was being used to "spread messages" that he didn't believe in. 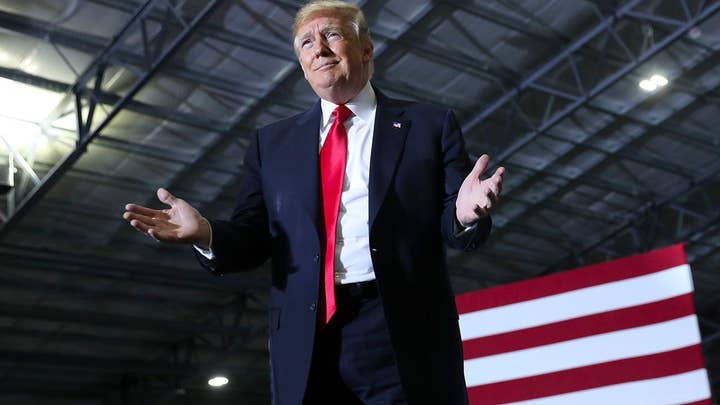 It's unclear what prompted the rapper to announce his "distance," but at the time he did reference "Blexit" — a campaign developed by conservative activist Candace Owens aiming to move African-American voters away from the Democratic Party.

Weeks earlier, West had lunch with Trump and also met with him in the Oval Office. Donning a red "MAGA" cap, West praised the president and covered scattered topics, including Superman, the 13th and Second Amendment and North Korea.

Referring to Trump's signature hat, West said, "They tried to scare me not to wear this hat. When I put this hat on, it made me feel like Superman — my favorite superhero. You made a Superman cape for me."

Overall, West was complimentary to the president, and at one point even said he loved him and ran around the Resolute Desk to hug him.