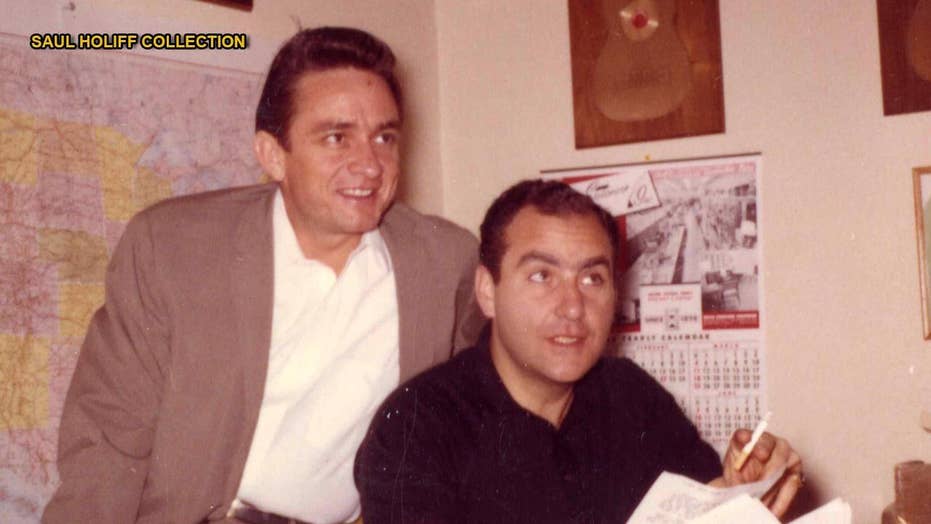 Fox411: New book sheds light on the relationship between Johnny Cash and former manager Saul Holiff including what eventually led to the two parting ways in 1973

When Julie Chadwick received an email marked “confidential” in 2005, the local Canadian reporter had no idea she would uncover a forgotten chapter in Johnny Cash’s life.

The message was from Jonathan Holiff, whose late father Saul managed the Man in Black for 13 years before quitting in 1973 at the height of the singer’s career.

The patriarch oversaw the country music legend’s career, introduced him to June Carter and even handled his divorce from first wife Vivian. But six months before the critically-acclaimed Cash biopic “Walk the Line” hit theaters in 2005, the elder Holiff committed suicide at age 80, leaving no note.

His son, who was struggling with the sudden death of his estranged father, unearthed a storage locker that was filled with hours of audio diaries, hundreds of letters and photos, taped phone calls and long-forgotten newspaper clippings that explored Holiff’s role as a rock ’n’ roll promoter during the 1960s in Canada.

While working on a documentary called “My Father and the Man in Black,” he gave Chadwick, who was working on a story about the upcoming film, full access to the archives.

Chadwick’s understanding of Saul Holiff and his complicated relationship with Cash led to a book called “The Man Who Carried Cash.”

“Saul initially stressed through Cash’s drug addiction,” Chadwick told Fox News. “There is one incident when they were doing a tour and Saul had organized an incredible show in Paris.

"He really tried to develop high-level performances for Johnny to do. And he had this idea to get Johnny out of the niche country music labeling and become a big crossover pop star. And part of that was getting him in venues where western artists had never played before… He organized this show, but Johnny doesn’t show up. He [instead] ran off to London and was partying with Bob Dylan.”

When Cash was famously arrested in El Paso, Texas, in 1965 for smuggling amphetamines from Mexico, it was Holiff who had to clean up the mess. News reports claimed at the time Cash was found with 668 Dexedrine and 475 Equanil tablets in his luggage. Later in an interview, Cash said he routinely took about 100 pills a day and washed them down with beer.

“There was a memo from 1965 where they’re about to go on this tour and Saul said, ‘Johnny is having some sort of throat problem. He’s not going to be able to make the first day of the tour,'” said Chadwick. “Saul was panicking, so I think he started dictating a memo to his wife Barbara to keep a hold of everything that was happening, which I’m guessing it’s to prepare for a lawsuit. Later they’re trying to find Johnny all over Nashville.

"He eventually misses the entire tour. And the promoter was threatening a lawsuit… In that memo, two days later, Johnny was driving June’s Cadillac in Nashville and ends up crashing through a telephone pole. It was one incident after the other.”

Cash’s addiction may not have surprised everyone involved with his career.

“It was pretty common back then for performers and musicians to take various types of speed while on the road,” said Chadwick. “His addiction, along with many others, started while on the road. They often had to drive huge distances from place to place. So in order to stay up at night, they would have to take these amphetamines to stay awake… But he built a huge tolerance.”

But even while Cash struggled personally, Holiff was determined to give his life purpose.

Johnny Cash with a Molson Canadian backstage in London, Ontario, 1958. (Photo courtesy Marilynne Caswell, who was a promoter that worked with Saul Holiff.)

"I saw from his own letters to CBS and various networks that as early as 1964 he was really trying to push for him to have his own show and was developing pilots. But it became different for him in the mid ’60s because when you have someone who clearly has the physical signs of addiction, it doesn’t make for great television.”

Chadwick pointed to one appearance at Peter Seeger’s “Rainbow Quest” where a thin and hollow-eyed Cash couldn’t stop twitching and even takes off his shoes on set.

However, it would be religion, not drugs, that prompted Holiff to quit in 1973.

“As he became more famous, Johnny realized he had this platform through which he can talk about his relationship with God,” said Chadwick. That’s where he wanted to take his career. That caused a lot of conflict with Saul on multiple fronts.”

While Christianity may have helped Cash cope with his demons, Holiff didn’t think it made good business.

“Johnny wanted to do a film about the life of Jesus and spend his own money on it… Saul was trying to gently tell him he wasn’t sure this was greatest idea because there’s a lot of people out there who aren’t Christian,” she said. “He wasn’t sure how well it would have done with Johnny’s audience. And Johnny basically said, ‘If you don’t want to do this, I’ll find someone else who does.’

Johnny Cash, Kirk Douglas and Saul Holiff on the set of the 1971 film "A Gunfight". (Unknown Photographer. Saul Holiff Collection.)

"And also, I think Saul personally just found it difficult because he wasn’t religious. He was Jewish, but was personally [an] atheist… It was strange. You would think he went through all the chaos of the ‘60s, so why would he quit? But it comes down to religious conflict essentially.”

The two would later reconnect before Cash died in 2003 at age 71 from complications of diabetes. Chadwick is hoping Holiff’s legacy in managing one of the most iconic voices in country music won’t be forgotten.

“I really do credit Saul for pushing on the idea of putting [Johnny] in living rooms all across America, which helped cement his status as a superstar,” she said. “I’m not really sure why, but he was sidelined out of the story [over the years]. I’m surprised in earlier books about Cash, they don’t even mentioned Saul… But he played such a crucial role.”