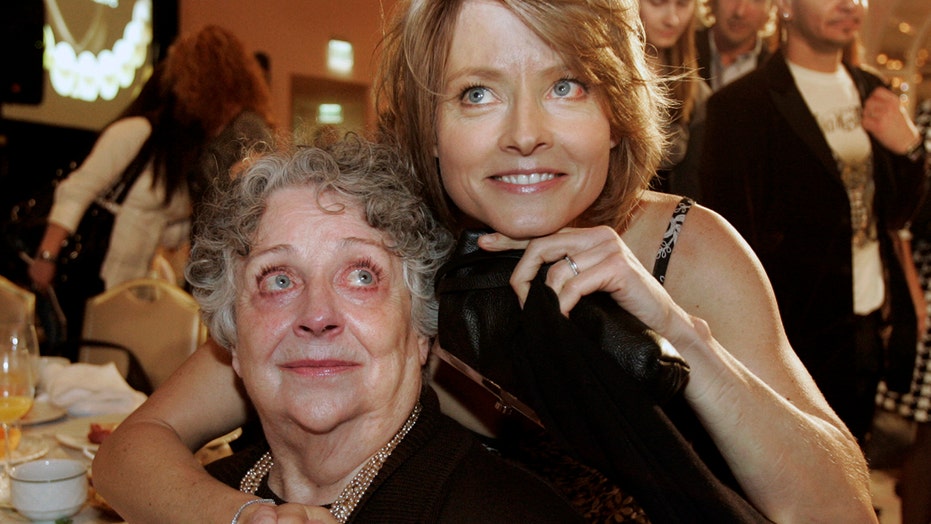 Evelyn "Brandy" Foster, who managed her daughter Jodie's career from her child-prodigy years through two Academy Awards, has died, her family said Thursday.

Brandy Foster died peacefully at her Los Angeles home of complications from dementia on Monday, her daughters Jodie, Lucinda, Constance and son Bud said in a statement. She was 90.

A native of Rockford, Illinois, Brandy Foster came to California as a touring big-band singer and worked briefly for a Hollywood publicist.

In her 30s as a single mother she began managing the career of her third child Bud, who then went by Buddy and was best known for his regular role in the "Andy Griffith Show" spinoff, "Mayberry RFD."

Her youngest child, Jodie, would begin acting in commercials at age 3.

FILE - This Dec. 4, 2007 file photo shows actress-director Jodie Foster, right, with her mother Evelyn Foster after she received the Sherry Lansing Leadership Award at during the 16th annual Women in Entertainment breakfast in Beverly Hills, Calif. Evelyn “Brandy” Foster, who managed her daughter Jodie’s career from her child-prodigy years through two Academy Awards, died peacefully at her Los Angeles home of complications from dementia, Monday, May 13, 2019.  (AP Photo/Kevork Djansezian, File)

She was a demanding and savvy manager for her daughter, making moves that some questioned like having her play a child prostitute at age 14 in Martin Scorsese's "Taxi Driver." Brandy Foster had wanted to get her daughter out of the child-actor rut and it worked. Jodie Foster got the first of four Oscar nominations and began an elite adult career.

JODIE FOSTER: ‘EVERY MAN OVER 30’ SHOULD THINK 'ABOUT THEIR PART' IN SEXUAL HARASSMENT

"Evelyn was without a doubt the strongest person her family has ever met, a champion, a fighter, full of fire and love," her children's statement said. "No one could beat her style, all five feet tall with naturally 'cork screw' hair. Her family will remember those dimple smiles and big hugs and well placed four letter words."

Brandy Foster would remain her daughter's manager until her second Oscar, in 1992, for "The Silence of the Lambs." Jodie Foster also won an Oscar for 1989's "The Accused."