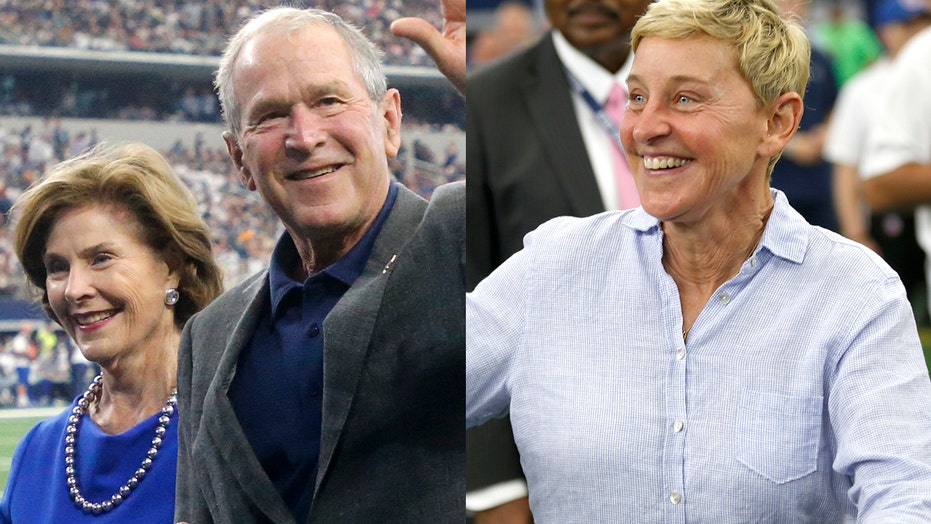 Ellen DeGeneres has found herself at the center of a raging controversy.

After being photographed at a Dallas Cowboys football game with former President George W. Bush this past weekend, DeGeneres, 61, took heat on Twitter for spending time with someone at the opposite end of the political spectrum.

Since then, several celebrities and public figures have voiced their opinions about the issue, and those perspectives are mixed.

Actress Reese Witherspoon voiced her support for DeGeneres in a since-deleted tweet, thanking DeGeneres for her "important reminder."

Both posts drew largely negative responses from commenters, some calling for the posts to be deleted, saying that the actresses were "privileged" and calling Bush harmful to the Middle East and the LGBTQ community.

Shelton tweeted: "Amen @TheEllenShow... Thank you for saying this," while Rich sarcastically thanked Hollywood for telling people who they "can/can't be friends with."

Ballerini retweeted DeGeneres' rebuttal with "watch this," followed by a heart emoji.

The controversy also came up during Thursday's episode of "The View," and co-host Abby Huntsman said when she saw the video, "I didn't spend my Saturday tweeting out ...we should be spending that time with our children, with our family or, heaven forbid, friends that might think differently than we do..."

Huntsman's co-host Joy Behar fired back, saying: "I don't agree with that 100 percent. ... I always said I didn't want to get to know George W. Bush because I knew I would like him. I knew I would because he seems like a likable kind of guy. But if you lost a child in Iraq then you don't like him so much. And I don't see myself hanging out with Donald Trump anytime in this lifetime."

Sunny Hostin agreed with Behar, Meghan McCain said she fell "somewhere in the middle" and Whoopi Goldberg voiced support for DeGeneres "taking a second to show someone humanity."

Among the celebrities who voiced concern about DeGeneres' actions was actor David Cross, who called DeGeneres' defense "weak, self-serving, [sic] dismissive and eye-opening."

Oscar-winner Susan Sarandon quoted Out Magazine's response to the controversy with "But missing the point entirely, DeGeneres framed the issue as simply a matter of her hanging out with someone with different opinions, not a man repeatedly accused of being a war criminal.”

Marvel star Mark Ruffalo said that talking about Bush's kindness should be out of the question until he is "brought to justice for the crimes of the Iraq War."

On Tuesday, a spokesperson for Bush told Fox News: "President and Mrs. Bush really enjoyed being with Ellen and Portia (de Rossi) and appreciated Ellen’s comments about respecting one another. They respect her."