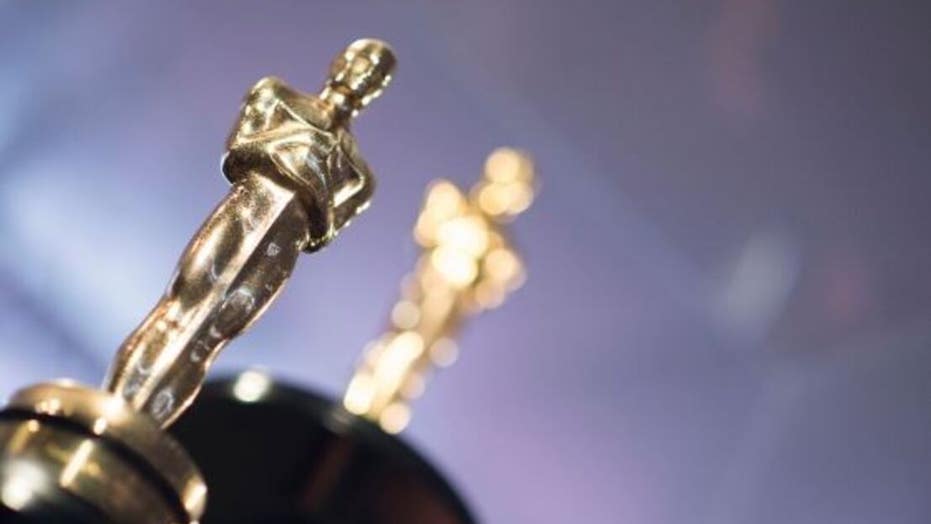 The most political moments at the Oscars

Oscars: A look back at the most political moments in the history of the Academy Awards.

The Oscars showcase more than just Hollywood itself.

Over the years, actors and filmmakers have spoken out at the Tinseltown event about a wide array of issues including politics, war, climate, race and sexuality.

Read on for a look at some of the political moments that have taken place at awards shows over the years.

OSCARS 2020: WHERE TO WATCH AND WHAT TO KNOW ABOUT THE ACADEMY AWARDS

Littlefeather went up on stage after Brando won best actor for his role in the mob drama “The Godfather” -- and held up a hand to the gold statuette held out by presenter Roger Moore.

Speaking for Brando, Littlefeather said the actor “very regretfully cannot accept this very generous award.” One of the reasons she cited was “the treatment of American Indians today by the film industry [...] and on television in movie reruns.”

The Jewish Defense League argued against Redgrave's nomination due to her participation in a pro-Palestinian documentary, CBS reported. The organization ultimately protested the event due to her involvement in "The Palestinian."

During the ceremony, Redgrave won the supporting actress award for her role in the drama “Julia.”

“I think you should be very proud that in the last few weeks you've stood firm and you have refused to be intimidated by the threats of a small bunch of Zionist hoodlums,” she said while giving her acceptance speech, “whose behavior is an insult to the stature of Jews all over the world and to their great and heroic record of struggle against fascism and oppression.”

Oliver Stone slammed the Vietnam War when he accepted the directing award for “Platoon,” which takes place during the military conflict.

Stone said that “if it does, then those American boys died over there for nothing — because America learned nothing from the Vietnam War.”

The personal and political blended at the Oscars in 1988: Massachusetts Gov. Michael Dukakis earlier announced he was seeking the Democratic presidential nomination in 1987.

On Oscar night, his cousin and actress Olympia Dukakis won for her supporting role in "Moonstruck." As part of her acceptance speech, she raised her Oscar statuette in the air and exclaimed, “Okay Michael, let’s go!”

Susan Sarandon and Tim Robbins came on stage as best film editing presenters, where the then-couple advocated for Haitians who were allegedly denied entry to the U.S. and kept at Guantanamo Bay.

“Their crime?” Robbins asked. “Testing positive to the HIV virus.”

“On their behalf and all the people living with HIV in this country, we’d like to ask our governing officials in Washington to admit that HIV is not a crime and to admit these people into the United States," Sarandon added. "Thank you.”

Robbins later quipped, “Which brings us, of course, to editing.”

Richard Gere announced the nominees for best art direction — after speaking about China and Tibetan independence first. While on stage, Gere told the audience that the show was being shown in China.

“Now the first thought that came to me was, I wondered if Deng Xiaoping is actually watching this right now, with his children and his grandchildren, and with the knowledge that what a horrendous, horrendous human rights situation there is in China — not only towards their own people but to Tibet as well,” he said, referring to the Chinese politician.

Gere added that he was wondering “if something miraculous and really kind of movie-like could happen here, where we could all kind of send love and truth and a kind of sanity to Deng Xiaoping right now in Beijing, that he will take his troops and take the Chinese away from Tibet and allow these people to live as free, independent people again.”

Elia Kazan, who directed Hollywood films like “On the Waterfront” and “East of Eden,” was presented with a lifetime achievement award at the 1999 Oscars.

The accolade came after Kazan gave the names of several people who were part of the American Communist Party in the 1930s to the House Un-American Activities Committee in 1952, PBS reported.

Numerous audience members stood for the director when he came out to accept the award, while others remained seated.

“I want to thank the Academy for this honor to a film on the abortion subject and Miramax for having the courage to make this movie in the first place,” Irving said when accepting the Oscar for best adapted screenplay for “The Cider House Rules.”

Toward the end of his speech, Irving thanked “everyone at Planned Parenthood and the National Abortion Rights League.”

Halle Berry’s best actress win in 2002 marked the first ever African-American woman to nab the award.

“This moment is so much bigger than me,” Berry said. “This moment is for Dorothy Dandridge, Lena Horne, Diahann Carroll. It’s for the women that stand beside me, Jada Pinkett, Angela Bassett, Vivica Fox. And it’s for every nameless, faceless woman of color that now has a chance because this door tonight has been opened.”

Director Michael Moore condemned then-President George W. Bush at the 2003 Oscars amid the debate over the Iraq war.

Sean Penn won best actor for his role as openly gay politician Harvey Milk in the drama “Milk” at the Oscars in February 2009. During his speech, he referenced a California state proposition -- dubbed Prop 8 -- which banned gay marriage and passed in November 2008.

“For those who saw the signs of hatred as our cars drove in tonight, I think that it is a good time for those who voted for the ban against gay marriage to sit and reflect and anticipate their great shame and the shame in their grandchildren’s eyes if they continue that way of support,” Penn said. “We’ve got to have equal rights for everyone.”

Penn also declared he was “very, very proud to live in a country that is willing to elect an elegant man president and a country who, for all its toughness, creates courageous artists.”

First lady Michelle Obama made a surprise appearance at the Oscars, opening the envelope that contained the name of the best picture winner, “Argo.”

Appearing via streaming video from the White House, Mrs. Obama said all of the nominees demonstrated that “we can overcome any obstacle.”

She said that message is "especially important for our young people" and thanked Hollywood for encouraging children "to open their imaginations."

Obama was introduced by Jack Nicholson, who noted that the best picture trophy is usually announced solo.

Poitras praised Edward Snowden when she accepted the award for best documentary feature for her film about the controversial NSA whistleblower.

“The disclosures that Edward Snowden reveals don’t only expose a threat to our privacy, but to our democracy itself,” she said. “When the most important decisions being made affecting all of us are made in secret, we lose our ability to check the powers that control. Thank you to Edward Snowden, for his courage and for the many other whistleblowers.”

The “Boyhood” star pushed for women’s equality after she won best supporting actress.

“To every taxpayer and citizen of this nation, we have fought for everybody else’s equal rights,” Arquette said at the end of her speech. “It’s our time to have wage equality once and for all and equal rights for women in the United States of America.”

The singer spoke out on stage, after he and rapper Common won the Oscar for best original song for their tune “Glory” from the Civil Rights-era drama “Selma.”

“We wrote this song for a film that was based on events that were fifty years ago, but we say that ‘Selma’ is now because the struggle for justice is right now,” Legend told the crowd. “We know that the Voting Rights Act that they fought for fifty years ago is being compromised right now in this country today. We know that right now the struggle for freedom and justice is real. We live in the most incarcerated country in the world. There are more black men under correctional control today than were under slavery in 1850.”

“Climate change is real, it is happening right now,” DiCaprio said while accepting the best actor prize. “It is the most urgent threat facing our entire species, and we need to work collectively together and stop procrastinating.”

Farhadi protested President Trump’s travel ban by not attending the 2017 Oscars. As a result, the Iranian director wasn’t on hand when his film “The Salesman” was named best foreign language film.

“I’m sorry I’m not with you tonight,” Iranian-American engineer Anousheh Ansari said, while reading a statement from Farhadi. “My absence is out of respect for the people of my country and those of other six nations whom have been disrespected by the inhumane law that bans entry of immigrants to the U.S.”

Mexican actor Gael Garcia Bernal made an apparent anti-Trump reference, when he spoke out at the 2017 Oscars before announcing the nominees for best animated feature film.

“Flesh and blood actors are migrant workers,” he said. “We travel all over the world, we build families, we construct stories, we build life that cannot be divided. As a Mexican, as a Latin American, as a migrant worker, as a human being, I’m against any form of wall that wants to separate us.”

OSCARS 2020: EVERYTHING INSIDE THE RUMORED $148G GIFT BAGS FOR NOMINEES

Stars Kumail Nanjiani and Lupita Nyong'o took the stage to share a message of support to Dreamers ahead of announcing "Shape of Water" as the winner of best production design at the 90th annual Academy Awards.

“To all the dreamers out there,” Nanjiani continued. “We stand with you."

In the presentation speech, Andrés noted that the film "reminds us of the understanding and compassion that we all owe to the invisible people in our lives: immigrants and women, who move humanity forward."

Hillary Clinton even chimed in, noting that Andrés' words on immigrants and women were "well said."

"Before the world tonight, I give praise to our ancestors who have built this country into what it is today along with the genocide of its native people," Lee prefaced his speech. "We all connect with our ancestors. We will have love and wisdom regained, we will regain our humanity. It will be a powerful moment."

"The 2020 presidential election is around the corner. Let’s all mobilize. Let’s all be on the right side of history. Make the moral choice between love versus hate. Let’s do the right thing! You know I had to get that in there," Lee said on the election, referencing his 1989 film "Do the Right Thing."