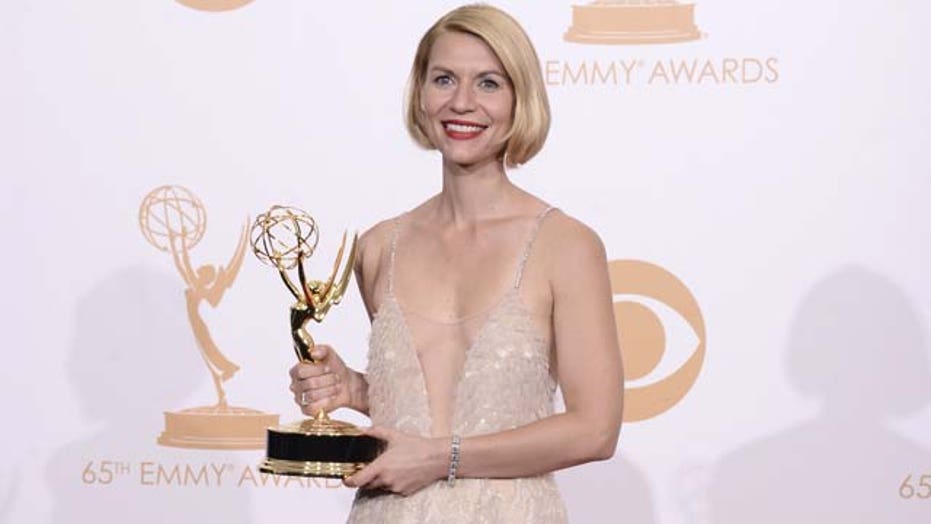 But the night also had some unexpected winners and big upsets. Steven Colbert beat out friend Jon Stewart for the first time in 11 years, taking home the prize for Outstanding Variety Series for "The Colbert Report." Stewart had one every year since 2002.

Michael Douglas also nabbed his first Emmy win in five tries for his role as Liberace in "Behind the Candelabra." The actor thanked his estranged wife Catherine Zeta-Jones and got some laughs for quips he made about co-star Matt Damon. "Behind the Candelabra" also won the award for Outstanding Movie/Miniseries.

The Emmys telecast was notably sprinkled with several serious tributes to some of the stars who died this year. Rob Reiner spoke about his "All in the Family" co-star Jean Stapleton and Robin Williams paid tribute to "Mork & Mindy" favorite Jonathan Winters. Elton John also performed a song dedicated to Liberace.

During another tribute, Jane Lynch spoke about “Glee” star Cory Monteith, who died this year of a drug overdose. Edie Falco also chimed in with a teary-eyed tribute to "Sopranos" star James Gandolfini.

As Emmys night kicked off, the ubiquitous reality series “Duck Dynasty” got an early shout out.

The Robertson family's show was mentioned twice within the first 15 minutes of the awards show. A clip from the A&E program was shown during the pre-taped show intro, and then the Robertson clan was mentioned on stage.

PHOTOS: Emmys fashion, so hot or so not?

“Look at us, a bunch of amateurs hoping to get a selfie with the guys of ‘Duck Dynasty,’” former Emmys host Conan O’Brien quipped when he rushed the stage to join a parade of one-time Emmy hosts who schooled Neil Patrick Harris about how to run the TV awards show.

Lynch, Jimmy Kimmel and Jimmy Fallon all joined Harris on stage as the show kicked off, and Tina Fey and Amy Poehler chimed in from the front row.

“Twerk it,” the duo advised Harris, making a clear Miley Cyrus VMAs reference right out of the gate.

“I come to awards shows for the twerking,” Tina Fey said. Poehler added: “It may degrading but we would be degrateful.”

Tina Fey and Tracey Wigfield took home an early Emmy for Outstanding Writing for a Comedy Series for “30 Rock” which wrapped this year after seven seasons.

Julia Louis-Dreyfus won the award for Best Lead Actress in a Comedy Series.

Claire Danes took home yet another award for "Homeland," beating out "Scandal's" Kerry Washington, the first African-American nominee for Best Actress in a Drama since Cicely Tyson in 1995 for "Sweet Justice."