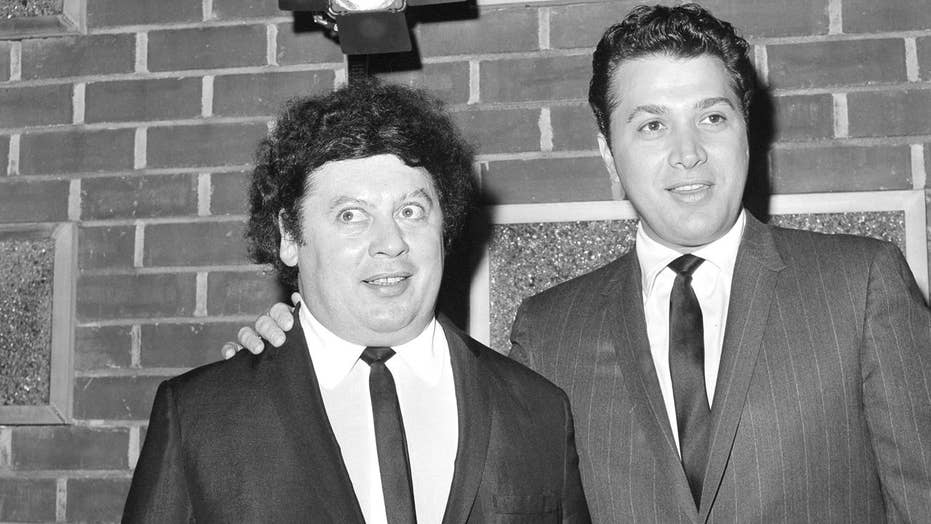 Fox411: Marty Allen, the baby-faced, bug-eyed comedian with wild black hair who was a staple of TV variety shows, game shows and talk shows for decades, has died at the age of 95.

Marty Allen, the baby-faced, bug-eyed comedian with wild black hair who was a staple of TV variety shows, game shows and talk shows for decades, died Monday night. He was 95.

Allen died in Las Vegas of complications from pneumonia with his wife and performing partner of the last three decades Karon Kate Blackwell by his side, Allen's spokeswoman Candi Cazau told The Associated press.

Allen, known for his greeting and catchphrase "hello dere," was a living link late in life to a generation of long-dead superstars with whom he shared a stage, including Dean Martin, Frank Sinatra, Lena Horne and Elvis Presley

He first found fame as half of the duo Allen & Rossi with partner Steve Rossi, who died in 2014. Allen & Rossi appeared 44 times on "The Ed Sullivan Show," including the episodes where the Beatles performed and most of America watched.

"Everyone remembers those shows with The Beatles, and they were great, but we appeared on all the shows," Allen said in 2014. "There wasn't a talk show on TV that didn't want Allen & Rossi."

FILE - In this March 16, 1965, file photo, comedian Marty Allen, center, arrives for the premiere of "The Train" with his wife Frenchie, right, and Rosemary Wilson, wife of columnist Earl Wilson, in New York. Allen's spokeswoman Candi Cazau says he died Monday, Feb. 12, 2018, of complications from pneumonia. His wife and performing partner Karon Kate Blackwell was by his side. He was 95. (AP Photo/John Lent, File) (Copyright 2018 The Associated Press. All rights reserved.)

The duo appeared regularly on "The Tonight Show With Johnny Carson" and "The Merv Griffin Show." They also toured comedy clubs nationwide, headlined shows at major Las Vegas casinos and released a series of hit albums until their amicable breakup in 1968.

Allen then took on a series of serious roles on daytime television and made-for-TV movies, and was a regular on "The Hollywood Squares" and other celebrity-themed game shows.

He was a regular entertainer on the Las Vegas Strip for much of his life, and tributes from there poured in Monday night.

"We have lost another iconic Las Vegas entertainer, Marty Allen," Las Vegas magician Lance Burton tweeted. "What a funny man who brought joy to millions of people for 95 years."

Ventriloquist and Strip luminary Terry Fator tweeted that "Las Vegas and show business lost a legend tonight.... and I lost a friend."

Comedian Gilbert Gottfried tweeted, "Farewell to one of the funniest people onstage and off.

FILE - In this Aug. 15, 1968, file photo, comedian Marty Allen, fuzzy-haired member of the comedy team of Allen &amp; Rossi, has his hair styled by barber Sol Goldstein in Hollywood, Calif. Allen's spokeswoman Candi Cazau says he died Monday, Feb. 12, 2018, of complications from pneumonia. His wife and performing partner Karon Kate Blackwell was by his side. He was 95. (AP Photo/Wally Fong, File) (Copyright 2018 The Associated Press. All rights reserved.)

Allen was born in Pittsburgh and served in Italy in the Army Air Corps in World War II, earning a Soldier's medal for valor.

Then in 1984 he married Blackwell, a singer-songwriter who became his performing partner in his last decades and acted as the goofy Allen's "straight man" just as Rossi did half a century earlier.

He kept making crowds laugh into his mid-90s.

"It's unbelievable to be 94 years old," Marty Allen told a New York audience in 2016. "My wife says, 'What do you want for your birthday?' I told her, 'An antique.' So she framed my birth certificate."