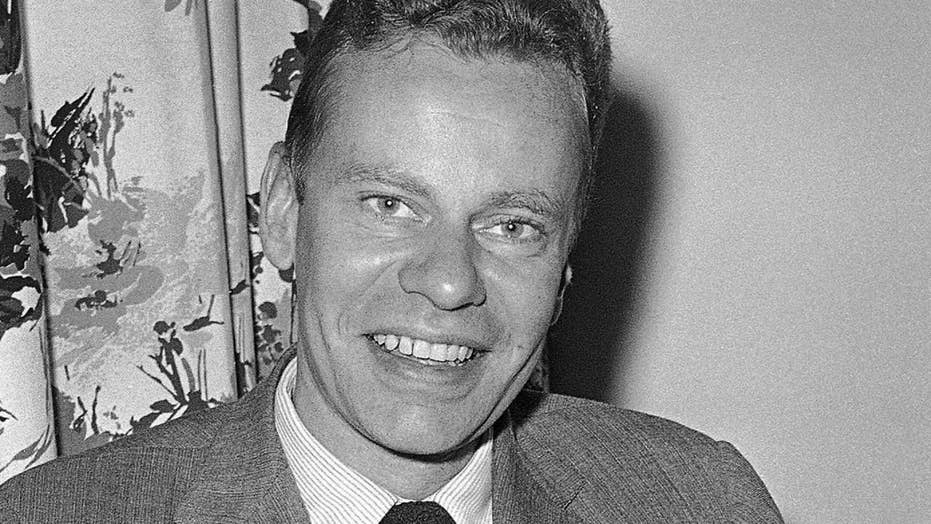 The central figure in the TV game show scandals of the late 1950s has died. Charles Van Doren was 93.

Charles Van Doren, the disgraced game show contestant who inspired the 1994 movie "Quiz Show," has died. He was 93.

The dashing young academic's meteoric rise and fall as a corrupt game show player served as a cautionary tale about the staged competitions of early television after he admitted to cheating on the 1950s show “Twenty-One.”

His son John Van Doren told the Associated Press that his father died of natural causes Tuesday at a care center for the elderly in Canaan, Conn. Funeral services will be private.

The handsome scion of a prominent literary family, Van Doren was the central figure in the TV game show scandals of the late 1950s and eventually pleaded guilty to perjury for lying to a grand jury that investigated them. He spent the following decades largely out of the public eye.

NADJA REGIN, ACTRESS FROM ‘GOLDFINGER’ AND ‘FROM RUSSIA WITH LOVE,’ DEAD AT 87

"It's been hard to get away, partly because the man who cheated on 'Twenty-One' is still part of me," he wrote in a 2008 New Yorker essay, his first public comment in years.

Before his downfall, he was a ratings sensation. He made 14 electrifying appearances on "Twenty-One" in late 1956 and early '57, vanquishing 13 competitors and winning a then-record $129,000. NBC hired him as a commentator.

In a February 1957 cover story on Van Doren, Time magazine marveled at the "fascinating, suspense-taut spectacle of his highly trained mind at work."

"Just by being himself," Time wrote, "he has enabled a giveaway show, the crassest of lowbrow entertainments, to whip up a doting mass audience for a new kind of TV idol — of all things, an egghead."

Later, as the triumph unraveled into scandal, he initially denied he had been given advance answers, but he finally admitted that the show was rigged.

He retreated to his family's home in rural West Cornwall, Connecticut, after telling a congressional committee in 1959 that he was coached before each segment of the show.

BILL ISLES, CO-FOUNDER OF CHART-TOPPING THE O'JAYS, DEAD AT 78

In this April 2, 1957 file photo, Charles Van Doren and his bride, the former Geraldine Ann Bernstein, arrive from their Puerto Rican honeymoon at the former Idlewild Airport in New York.  (AP)

After spending much of the 1960s and '70s in Chicago, Van Doren and his wife, Geraldine, returned to Connecticut, residing for years in a small brown bungalow on the family compound. They did some teaching but largely lived in semi-seclusion, refusing to grant interviews and even leaving the country for several weeks when Robert Redford's film "Quiz Show" was released in the fall of 1994.

Van Doren refused to cooperate in the movie's making and declined to meet with actor Ralph Fiennes, who portrayed him in the film. Fiennes later told People magazine that after Van Doren brushed him off, he knocked on his door pretending to be lost so he could observe Van Doren's movements and speech patterns.

Van Doren broke his silence in 2008, writing an account of his downfall in The New Yorker and how he finally had publicly admitted a half-century earlier that he was "foolish, naive, prideful and avaricious."

"People who knew the entertainment business didn't have much doubt about what was going on, although they didn't speak out," he wrote.

In light of the large profits the rigged game shows were making, he added, "why would they?"

He also disclosed that he eventually did watch "Quiz Show" and laughed at an insulting reference that a character made about him. He said he had been tempted to take a consulting fee from the producers, but his wife talked him out of it.

In this Nov. 2, 1959 file photo, Charles Van Doren sits as a witness before Congress in Washington during a hearing on rigged television game shows. (AP)

Van Doren's family had a proud literary standing at the time of the scandal. His father, Mark Van Doren, was a critic, biographer and poet who won the Pulitzer Prize for poetry in 1940. His uncle, Carl Van Doren, received a Pulitzer in 1939 for a biography of Benjamin Franklin.

Charles Van Doren was himself a rising young academic at Columbia when he became famous on the quiz show. He went on to win $129,000 on the show after defeating Herbert Stempel, a New Yorker portrayed by John Turturro in the movie.

Stempel later went public and said contestants were fed the answers to the questions prior to the show. He said he was told to lose because the show's producers thought Van Doren had star potential.

NIRVANA REMEMBERS KURT COBAIN ON 25TH ANNIVERSARY OF HIS DEATH

In 1962, Van Doren and nine other winners from three NBC shows — "Twenty-One," ''Tic-Tac-Dough" and "Hi-Lo" — pleaded guilty to lying to a grand jury that had investigated the scandal. They were spared jail terms by a judge who said the nation's scorn was punishment enough.

After the scandal broke, Van Doren lost the $50,000-a-year job NBC gave him when he defeated Stempel. He also was dropped from the faculty at Columbia, where his father had been a professor for decades.

Friends said Van Doren's family was shocked by his eventual revelation that he had been given the answers in advance.

'THE TROUBLE WITH ANGELS' ACTRESS JUNE HARDING DEAD AT 81

"His father took it real hard. The old man was never the same after that," Whitney told a reporter who visited Cornwall when "Quiz Show" came out.

Van Doren later joined the Institute for Philosophical Research, a nonprofit Chicago think tank, and worked at Chicago-based Encyclopaedia Britannica for many years. Among his books were "The Idea of Progress," a philosophical work, and "A History of Knowledge; Past, Present, and Future."

Van Doren and his wife had two children, Elizabeth and John.

"He was a loving husband and a terrific father, and he's going to be deeply missed," John Van Doren said.

In West Cornwall, neighbors were protective of "Charley," as Van Doren was affectionately known.

Walter DeTheir, the proprietor of a store in Cornwall, said Van Doren was a quiet, shy man who came in regularly to pick up the Sunday New York Times.

"It's not that he isn't friendly, he just doesn't have much to say," DeTheir said.

In his New Yorker piece, Van Doren said he liked to avoid "people who say, 'Aren't you Charles Van Doren?' Well, that's my name, I say to myself, but I'm not who you think I am — or, at least, I don't want to be."