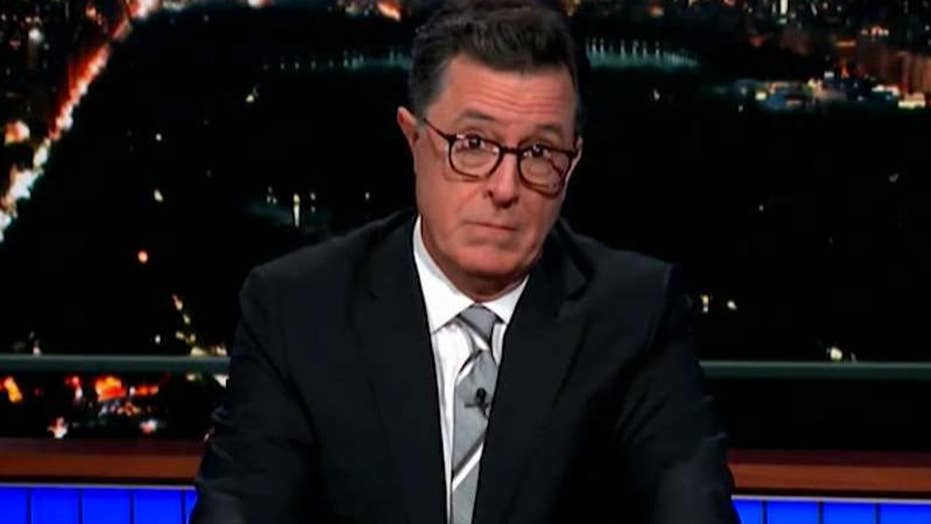 This week, the disgraced executive was denied the $120 million payout he was expected to get by the CBS Board of Directors due to his violation of company policies and lack of cooperation with internal investigations surrounding him. A bombshell report in July was the first to expose alleged sexual misconduct committed by Moonves.

Colbert began his show Tuesday night by questioning what was going to happen to the $120 million, some of which he thinks “goes to me.”

“I get half of it, the other half goes to Tom Selleck’s mustache,” Colbert jokingly clarified.

The late-night host then went after Moonves for his unwillingness to cooperate with investigators.

“How on earth did Les Moonves think he could get away with that? Every show he greenlit for the last 20 years was about investigations!” Colbert exclaimed, which is a tongue-in-cheek reference to CBS’s various fictional investigative series such as “CSI,” “NCIS” and other crime shows.

“On the bright side, CBS has enough material to start a new procedural; ‘NCIS: Human Resources,’” Colbert quipped.

The "Late Show" host initially tackled the Moonves allegations in July in a serious address to his viewers.

“Women over the past year have felt empowered to tell their stories in ways they haven’t before, which is an objectively good thing. Because, and it’s strange to have to say this, powerful men taking sexual advantage of relatively powerless employees are wrong. We know it’s wrong now and we knew it was wrong then,” Colbert told his audience. “And how do we know we knew it was wrong? Because we know these men tried to keep the stories from coming out back then.”

“Everybody believes in accountability until it’s their guy. And make no mistake, Les Moonves is my guy. He hired me to sit in this chair. He stood behind this show while we were struggling to find our voice,” Colbert continued. “He gave us the time and the resources to succeed. And he has stood by us when people were mad at me. And I like working for him, but accountability is meaningless unless it’s for everybody. Whether it’s for the leader of a network or the leader of the free world.”