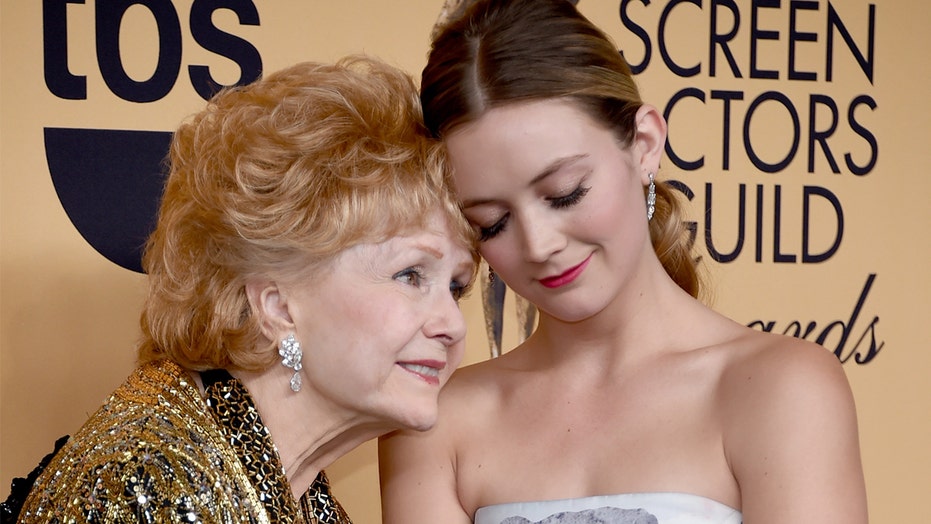 Billie Lourd paid tribute to her grandmother, Debbie Reynolds, on the five-year anniversary of her death.

Lourd, 29, took to Instagram on December 28 to share a throwback photo from her childhood featuring her as a toddler with Reynolds and her late mom, Carrie Fisher.

In the photo, Fisher and Reynolds are crouching down in front of a young Lourd outside. They both gazing at Lourd with smiles.

Lourd captioned the photo with a series of emojis that seemingly spell out the word "Abadaba," known as Lourd's nickname for her grandmother.

GEORGE MICHAEL’S PAL SAYS WHAM! SINGER NEVER GOT OVER LOSING HIS LOVE ANSELMO FELEPPA: ‘HE WAS QUITE LOST’

Lourd, who followed in her mother and grandmother's footsteps as an actress, similarly took to Instagram on Sunday and shared a heartfelt throwback snap of herself as a child next to her smiling mother and a koala.

"People always ask me what stage of grief I'm in," the 29-year-old captioned the post. "And my answer is never simple. I'm in a different stage of grief in each moment of every day."

"My grief is a multi course meal with many complicated ingredients," she shared. "An amuse bouche of bargaining followed by an anger appetizer with a side of depression, acceptance for the entree and of course a little denial for dessert."

"And that’s how grief should be - all things all at once - actually there is no ‘should’ in grief - grief just is whatever it is for you and that is how it ‘should be,’" Lourd continued. "Ps for anyone wondering why I’m posting this on the 26th it’s the 27th here down unda (aka Tomorrowland) so what better thing to post for my Momby’s Australian death anniversary (4 words I never thought I’d be putting next to each other?!?) than this picture of her and I with a koala!?"

"Sending my love to anyone out there who needs it," the star concluded her post. "I miss you Momby."

"It’s been 5 years and not a day goes by without me thinking of you," the caption read. "Gone but never forgotten."

Back in October, Lourd spoke to New Day about the pain she felt in losing both her mother and grandmother.

"It was brutal," she told the podcast. "It was really, really brutal, and I still hesitate and stutter because it’s really hard for me."

Lourd, who is now a mom to 15-month-old son Kingston Fisher with fiancé Austen Rydell, told the outlet that she misses her mom "every day."