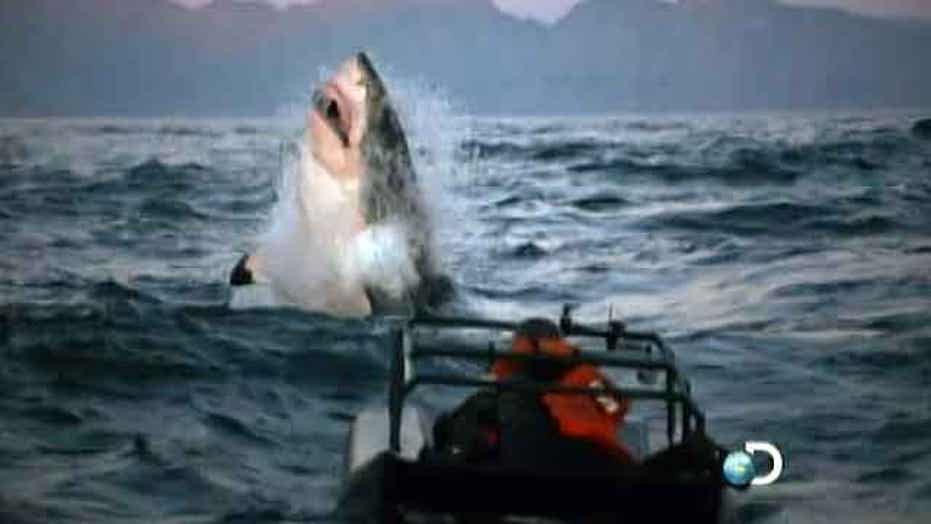 Is same shark responsible for deadly attacks off California?

A 15-year-old girl is bitten in half by a shark. A woman in Brazil dies following a shark encounter. And a vicious shark attack in New Zealand is caught on film. Enter Discovery Channel’s Shark Week, a highly-anticipated week of all-sharks-all-the-time programming that comes after a series of disturbing real-life shark attacks.

Discovery is planning to address the attacks of the past year with “Sharkpocalypse,” which promises to examine “the trend of sharks moving in closer to shorelines.”

Michael Sorensen, who oversees the Shark Week programming at Discovery, said the network included the special in this year’s programming because there have been more shark attacks in recent months than ever before.

“We’ve seen a steep incline in the last 12 months of the amount of shark attacks around the world,” Sorensen explained. “We thought it was really timely to ask the question of ‘Why?’ What is driving great whites and other sharks closer to the shore than we’ve ever seen?"

Sorensen said the network’s research showed that though shark populations are declining, attacks are on the rise.

“Their feeding patterns have changed. They’re adapting to things that might not be natural to [their] normal diet. They’re evolving to almost be scavengers and eat what they can as populations are declining.”

Paul Matusheski, executive producer of “Sharkpocalypse,” said the show investigates other causes for the increase in attacks as well.

“When you see a spike in shark attacks anywhere in the world you can usually kind of put that spot under a microscope and start looking at what has changed there to cause the attacks,” he said. “We’re investigating five different theories that explore the ideas of how humans have been doing things to do the environment… and how it could possibly be connected to the worldwide rise of shark attacks.”

“Last year actually was the highest [number of shark attacks] in 10 years in the United States,” Matusheski said. “There was a great white shark attack right off the beach of Cape Cod. The beaches were closed. We talk about that in our show.”

Sorensen said the recent, highly publicized attacks in American waters have brought shark fears to the forefront of viewers’ minds.

“Sometimes [news of a shark attack] doesn’t hit us as hard...like in Australia” he said. But the recent attacks in the U.S. bring the fear “closer to home,” he explained.

And Sorensen warned we could see even more attacks in the coming years.

Still, he hopes Discovery’s Shark Week as a whole won’t paint the species in a bad light.

“I know a lot of times we play off of people’s fears of great whites, but I think we also are, as a network, the biggest advocates for great whites.”

Matusheski agreed, saying the special doesn’t place the blame on the sharks.

“The really obvious thing to me is sharks—especially the sharks that people are most afraid of —should be protected. It would actually help us. We would stop messing up the ecosystem and there would be [fewer] attacks.”