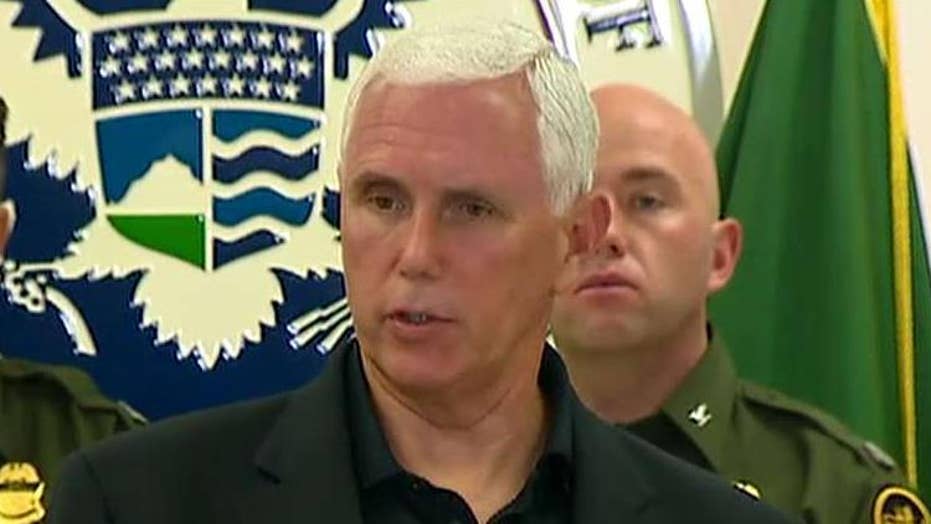 North Carolina Republican Sen. Thom Tillis says the border crisis can only be solved by Congress providing ICE with the resources that they need.

Milano tweeted the side-by-side, black-and-white images showing a photo of Pence below a photo of Himmler, the main architect of the Holocaust.

Both photos showed the men standing behind gates separating them from detainees -- migrants in Pence's case and prisoners of war in Himmler's.

Pence's trip to the Texas border included a visit  Border Patrol station where hundreds of men were crowded in sweltering cages without cots. Milano's tweet received mixed responses but many on the social media platform derided her comparison.

A chorus of Democratic lawmakers have claimed migrants are being detained under inhumane conditions. Pence and President Trump have heavily criticized media outlets and Democrats for the way they have viewed the issue.

DAN GAINOR: MEDIA DEMONIZE TRUMP ON IMMIGRATION, EMBRACE RAPINOE FOR KICKING HIM AROUND

"CNN is so dishonest. Today we took reporters to a detention facility on the border for families and children and all told us they were being treated well," the vice president tweeted on Friday.

"The crisis at our southern border is not a 'manufactured crisis,' it is real and is overwhelming our system. To show this, we also visited an overcrowded facility for adult men, many of whom have been arrested multiple times. These men were in a temporary holding area because Democrats in Congress have refused to fund additional bed space."

Last month, Rep. Alexandria Ocasio-Cortez, D-N.Y. claimed that the detention centers were "concentration camps on our southern border." She later clarified that she didn't think they were the same as "death camps" that Nazis oversaw during the Holocaust.

"The United States Holocaust Memorial Museum unequivocally rejects efforts to create analogies between the Holocaust and other events, whether historical or contemporary," a museum statement read. "That position has repeatedly and unambiguously been made clear in the Museum’s official statement on the matter – a statement that is reiterated and reaffirmed now."

Fox News' Joseph A. Wulfsohn and The Associated Press contributed to this report.