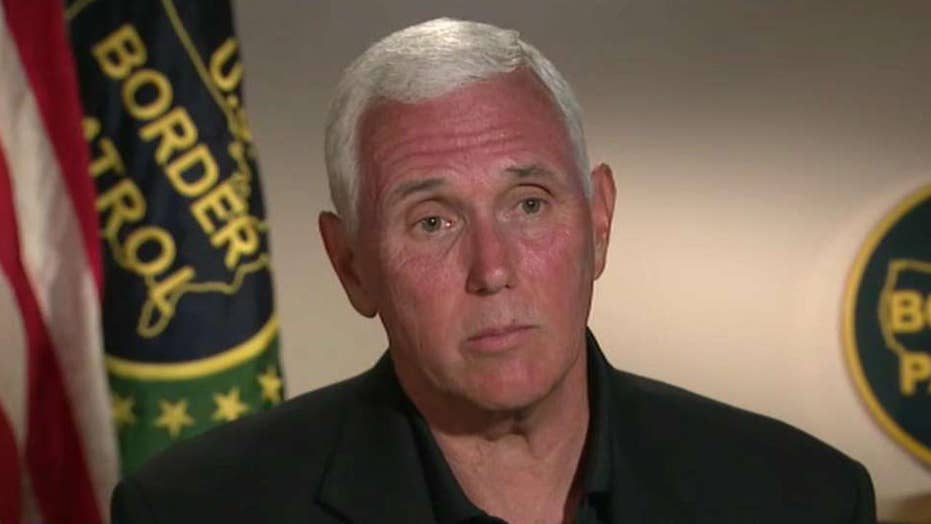 Pence and some Republican senators toured a migrant holding facility along the southern border as Democrats on Capitol Hill tried to shame the Trump administration over its handling of border crisis.

Vice President Mike Pence blasted CNN late Friday night for what he described as the network's "dishonest" coverage of his trip to a migrant detention center near the U.S.-Mexico border.

Pence, along with reporters and a group of GOP lawmakers, flew to McAllen, Texas, where he participated in a roundtable discussion with Border Patrol agents and toured a detention center. The vice president spoke with several migrant children and asked about their treatment at the facility with the help of a translator.

CNN's primetime coverage, however, featured only visuals of a large group of adult male migrants behind a fence attempting to engage with reporters. During CNN's "Anderson Cooper 360" program, the network played Pence's interview with CNN senior White House correspondent Pamela Brown on a split screen, showing only footage of the adult migrants and none of the footage of Pence visiting with children.

Later, CNN's Chris Cuomo criticized Pence's interview remarks and accused him of providing "spin" on the facility conditions. "Cuomo Prime Time" also made no reference to Pence's visit with the children.

"CNN is so dishonest. Today we took reporters to a detention facility on the border for families and children and all told us they were being treated well," Pence began. "The crisis at our southern border is not a 'manufactured crisis,' it is real and is overwhelming our system. To show this, we also visited an overcrowded facility for adult men, many of whom have been arrested multiple times. These men were in a temporary holding area because Democrats in Congress have refused to fund additional bed space."

He continued: "Rather than broadcast the full story, showing the compassionate care the American people are providing to vulnerable families, tonight CNN only played video of men in the temporary facility and didn’t play any footage of the family facility at all... ignoring the excellent care being provided to families and children. Our great @CBP agents deserve better and the American people deserve the whole story from CNN!"

"Our great @CBP agents deserve better and the American people deserve the whole story from CNN!"

CNN did not immediately respond to Pence's comments.

Several CNN anchors -- including Cooper, Cuomo, Don Lemon and Wolf Blitzer -- previously rejected President Trump's warning earlier this year that there was a crisis at the U.S.-Mexico border.

"You can build a physical barrier. But why say it's a cure-all to keep back this demonized group of people, like this marauding horde that doesn't exist. [Trump] created all of this. It's all bogus," Cuomo said Jan. 11.

"Let's talk about his imaginary Latin-American migrant conspiracy," Lemon said April 24. "This is part of a long history of him making things up about the caravan and the border crisis."

"President Trump will speak tonight from the Oval Office, trying to sell his border wall to a doubtful nation, as his administration uses falsehoods and misstatements to build the case for what it calls a crisis on the border," Blitzer said Jan. 8.

"Now, it's not our job to advocate for or against a given policy," Cooper said Jan. 8. "It's our job to call out the dishonest pursuit of it. So, as we wait for the president to speak about what he calls the crisis on the border, we're starting with the crisis of credibility he's created for himself."