The 2020 Ford Police Interceptor Utility is the fastest cop car in the USA and also the most high-tech, with a fuel efficient hybrid option and a threat detection system.

The new Ford Police Interceptor Utility is the fastest police pursuit vehicle in the U.S.A..

The Explorer based-SUV is available with at 400 hp twin-turbocharged 3.0-liter V6 that delivers top performance, according to the Michigan State Police benchmark tests. It’s quicker and faster around a track than the competitor’s sedans, not to mention the discontinued Taurus-based cruiser. Its 1:36:47 lap time around Grattan Raceway beating the all-wheel-drive Dodge Charger Hemi V8's 1:37:10.

But the pursuit-rated SUV is also offered as a hybrid that combines a 3.3-liter V6 and an electric motor tucked between it and a 10-speed transmission. It’s not a plug-in, but it does have enough juice in the battery pack to run the air conditioning, lights, computers and even a radar gun for extended periods without needing to constantly idle the engine. Ford said in tests the engine only runs 20 percent of the time compared to the last-generation Interceptor Utility when parked.

That saves a lot of fuel, as does the hybrid’s 24 mpg combined fuel economy rating. But the hybrid also delivers 318 hp and 322 lb-ft of torque, which is more than enough to put in the second-best performance among SUVs in the MSP tests. But its prowess isn’t all about power. While all of the Interceptor Utilities come standard with all-wheel-drive, the new Explorer rides on a rear-wheel-drive platform that improves their handling compared to the old front-wheel-drive-based model.

Put your foot down in any of them and up to 100 percent of the power will go to the rear wheels. Leave it there long enough and the vehicle switches into Pursuit mode, which loosens up the stability control, uses the transmission more aggressively and, in the case of the hybrid, works the engine to keep the battery charged so that the full electric motor boost is always available. Customers can also order the Interceptor Utility with a “hybrid delete” option that comes with just the 3.3-liter V6 rated at 285 hp and 260 lb-ft.

Compared to the civilian Explorer, which will also be offered with the turbo V6 and the Hybrid along with a 2.3-liter four-cylinder turbo, the Interceptor Utilities get cop tires, cop suspension, cop shocks … you know the drill. Their brakes are also bigger to better dissipate heat and they are equipped with a rear chassis brace designed to withstand being rear-ended by a car traveling at 75 mph. The rear load floors that can handle 880 pounds and maximum 5,000-pound tow ratings help them live up to the Utility part of the model name. 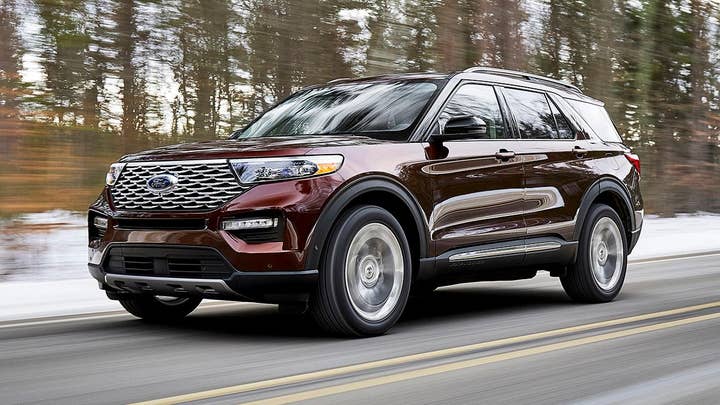 The Interceptor Utilities also get an extra set of eyes in the back of their heads courtesy of a Perimeter Alert. It uses sensors to monitor people approaching the vehicle from the sides and behind, runs the information through an algorithm that can determine potential threats and then turns on the rear camera, locks the doors and rolls up the windows automatically while alerting the officers inside the vehicle.

I drove all three versions on a test track set up in the parking lot at MetLife Stadium in East Rutherford, N.J., and the switch to the new rear-biased platform was apparent across the board. The old front-wheel-drive Interceptor Utility exhibited tons of understeer when driven hard, while the new ones are much more eager to bring the rear ends around in tight turns when you apply the throttle.

Do that in the turbo, and the SUV just moves. Ford said it only expects it to make up about 10 percent of sales because many departments, as a rule, don’t engage in high-speed pursuits, and it’s so fast that it can be too much for some inexperienced officers in the ones that do allow them. (Buyers of the sporty Explorer ST that shares it should keep in mind that you can’t outrun the law … it has aerial units.)

The 3.3-liter is no slouch on its own, but the hybrid is the most compelling powertrain and will likely be the best-seller, according to Ford. It’s plenty fast, handles as well as the others and makes a unique noise as the gas engine and 44 hp electric motor wind up in unison. It also makes a cool, futuristic hum to alert pedestrians as its cruising around town at low speeds on electric power.

Ford sold more Interceptor Utilities than every other police car combined last year, and the new model is nominally priced at $37,500 for the 3.3-liter, $41,000 for the hybrid and $42,000 for the turbo, but final transaction prices can vary on fleet sales. Deliveries are expected to begin in July.