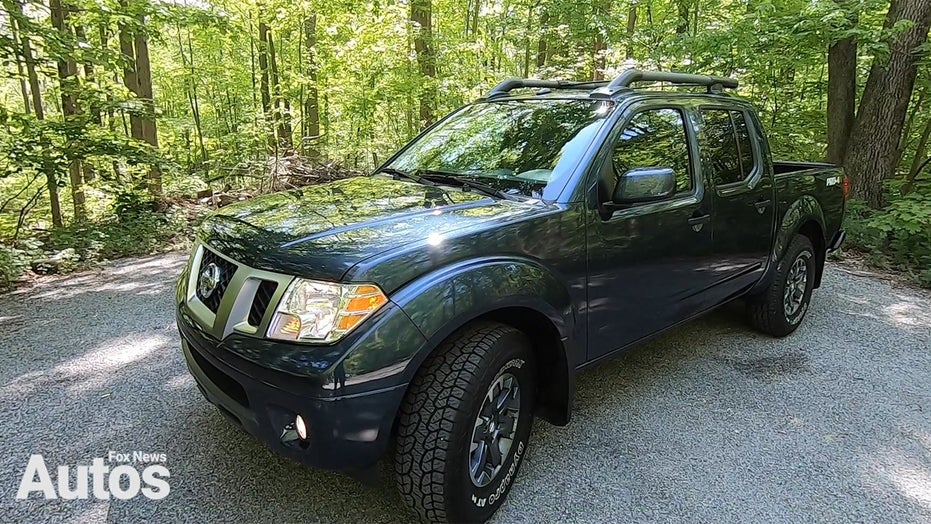 The 2020 Nissan Frontier features the oldest design of any truck on sale today, but it has an all-new engine that makes it feel a little younger. Fox News Autos editor Gary Gastelu takes it for a spin.

Nissan is set to launch its first fully redesigned Frontier pickup since 2005 next year, but it won’t be all-new when it finally gets here.

That’s because Nissan finished the new drivetrain first, so it decided to put it in the current generation truck for 2020 as a retirement gift before it gives up the title of "oldest new pickup on sale."

The 3.8-liter V6 and 9-speed automatic transmission replace the ancient 4.0-liter V6 and 5-speed combo, while the four-cylinder Frontier that was the lowest-priced pickup in America has been dropped for now.

The starting price for the Frontier is now $27,885, which puts it in between the six-cylinder small pickups from GM and Toyota, but with 310 hp it checks in with the most powerful motor in the midsize class, up 49 hp from 2019.

Fuel efficiency has also improved, but just slightly, with its 19-20 mpg combined ratings better by 1 or 2 mpg, depending on the trim level. There are four available in both King Cab and Crew Cab configurations, with the latter adding the PRO-4X off-road version at the top of the range for a fully loaded $38,585.

The PRO-4X comes with a standard 4x4 system equipped with a two-range transfer case and Dana rear axle with a lockable differential. It also gets upgraded Bilstein shock absorbers, a full set of skid plates, 16-inch wheels with Hankook all-terrain tires, a roof rack, mud flaps and leather seats that dress up the otherwise frozen-in-time interior.

Like the body, the cabin design is from another era and would look at home in an economy car. That said, it is roomier than the compact exterior dimensions suggest, has a very functional control layout and now comes standard with pushbutton start, electric windows and a tilt steering wheel across the lineup. The PRO-4X even features a USB port, but the dated infotainment and navigation system would qualify as retro-gaming. Apple CarPlay or Android Auto smartphone integration? Um...what’s a smartphone?

Driver aids like a blind-spot warning system, automatic emergency brakes and radar cruise control aren’t offered either, making the Frontier a very old-school truck, but the new engine is thoroughly modern. It pulls strongly with 281 lb-ft of torque, can tow up to 6,720 pounds with the right options checked and is as smooth as any mainstream V6 has a right to be. I suspect it will serve Nissan well in many other vehicles to come and wouldn’t be surprised to see it end up in the full-size Titan, too.

CHICAGO MAN DROVE HIS NISSAN FRONTIER OVER ONE MILLION MILES

Chicago deliveryman Brian Murphy has driven his 2007 Frontier over one million miles and it doesn't look much different than the 2020 model. (Nissan)

Similarly, the 9-speed, which is borrowed from the Titan, is seamless in its operation and offers a wide range of gearing that lets you go from the highway to a pretty steep, rocky trail before you have to think about engaging the LO range. The PRO-4X’s ride quality can get a little jittery at high speeds, but the steering isn’t as vague as a big-tire Toyota Tacoma's is.

When you do hit the rocks, the Frontier is an able crawler and climber. Is it better than an of its competitors? Probably not, but with its compact size, 9.8 inches of ground clearance and solid approach, departure and breakover angles, there’s not a lot to complain about. Throw in the fact that there are 15 years-worth of compatible parts and aftermarket accessories floating around, and the Frontier presents a nice slate for customization.

I suspect the 2020 Frontier will be a hot property as a used vehicle in a few years thanks to the engine upgrade, but if the rest of the 2021 model turns out to be as good as the new motor is, you might want to hold out making a purchase until that goes on sale later this year.