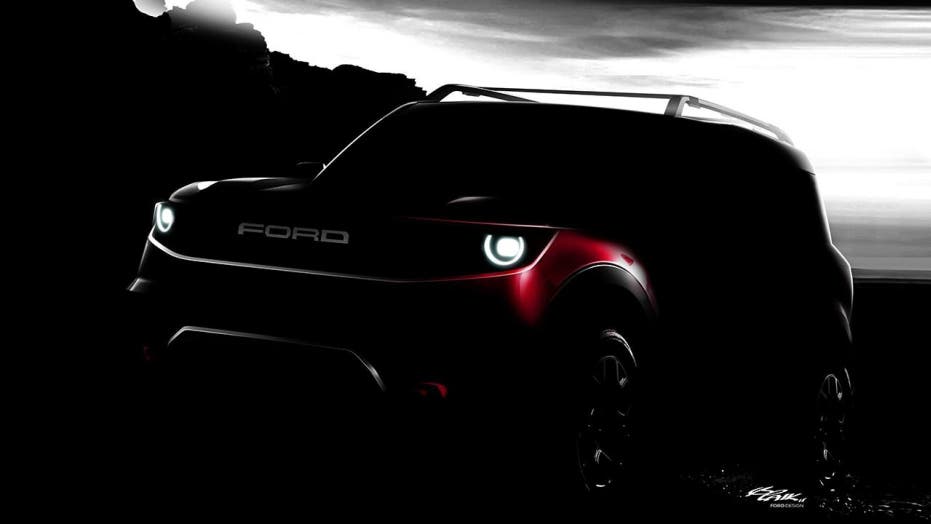 Ford needs to get some Flex Seal.

Just three days after photos of the upcoming rebooted Bronco leaked onto the Internet, shots of its crossover cousin have apparently hit the web.

The blurry images appear to have been taken in a studio and show the previously announced, but yet to be revealed “Baby” Bronco completely uncovered  They were originally posted to the fan site BroncoSportForum.com then removed, but have been republished by several outlets including Autoblog.

A Bronco Sport badge appears on the tailgate, possibly confirming the name of the Ford Escape-based utility that the automaker had previously teased with a shaded illustration. Changes include the grille, which has a different shape and now features the word BRONCO instead of FORD across it.

This rendering is the only official image of the "Baby" Bronco released so far. (Ford)

The blue vehicle has boxier styling than the Escape, with lower body cladding and a contrast black roof. Large hinges and a small handle on the rear glass, similar to the ones found on the Ford Expedition, suggest it can be opened independently of the tailgate.

THE 2021 FORD BRONCO SPOTTED WITH ITS TOP POPPED

While the big Bronco will compete with the Jeep Wrangler head-on as a serious 4x4 truck, Ford is positioning the smaller Bronco as an outdoor “lifestyle” vehicle with some off-road capability. Prototypes have been photographed being tested on dirt roads.

A date for the debut of the Bronco Sport has not been announced, but Ford said the Bronco will be unveiled sometime this spring.