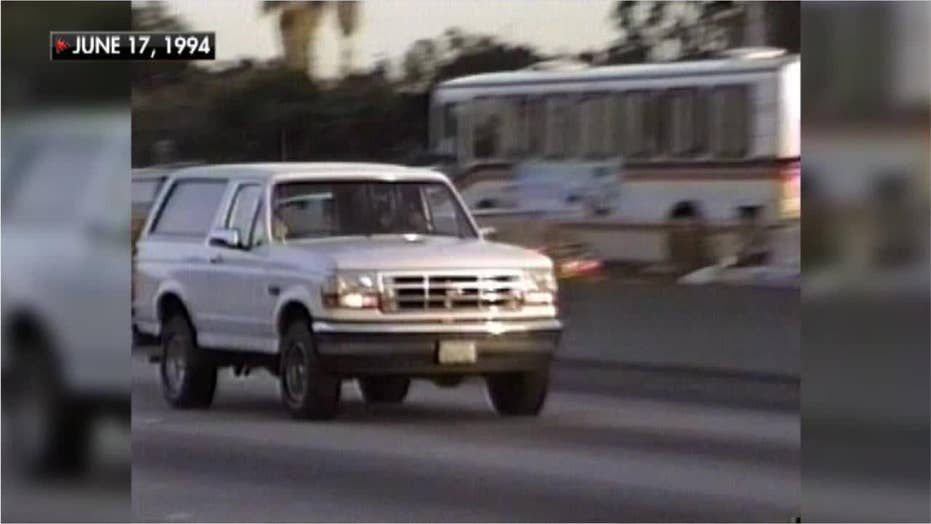 On June 17, 1994, the city of Los Angeles and stopped as O.J. Simpson’s led police on a wild and surreal ride in his friend’s white Bronco and captivated a nation along the way.

Twenty-five years ago today Al Cowling’s white Ford Bronco became one of the most famous and infamous vehicles of all time as he led police on a low-speed pursuit across Los Angeles with O.J. Simpson in the back seat.

An estimated 95 million people watched the event unfold on live television before the vehicle arrived at Simpson’s Brentwood home and he surrendered to police without incident.

GERALDO RIVERA: O.J. SIMPSON'S ON TWITTER -- WHY PEOPLE ARE FLOCKING TO HIM

The following year, Cowlings sold the truck to Simpson’s agent Mike Gilbert for a reported $75,000, and he still owns it today. It’s no longer in L.A., but has been on display at the Alcatraz East crime museum in Pigeon Forge, Tenn., since 2016.

Gilbert tried to sell it in 2017 around the time Simpson was released on parole in Las Vegas after serving 9 years in prison on charges stemming from an armed robbery, offering it to Rick Harrison from the show “Pawn Stars” for $1.3 million. In a negotiation depicted on the show, the two failed to come to an agreement, as Gilbert lowered his asking price to $1,250,000.

Gilbert said he’d never sell it for under $1 million, and that he’s confident it will be worth that much someday

According to a spokeswoman for Alcatraz East, there haven’t been any recent legitimate offers on the truck or a concerted effort undertaken to sell it since the “Pawn Stars” appearance.

While the Bronco is part of the permanent collection, the museum currently has a temporary exhibit called “Passion for Life: Nicole Brown Simpson” commemorating the 25th anniversary of her death with artifacts from her life and an awareness program about domestic abuse.