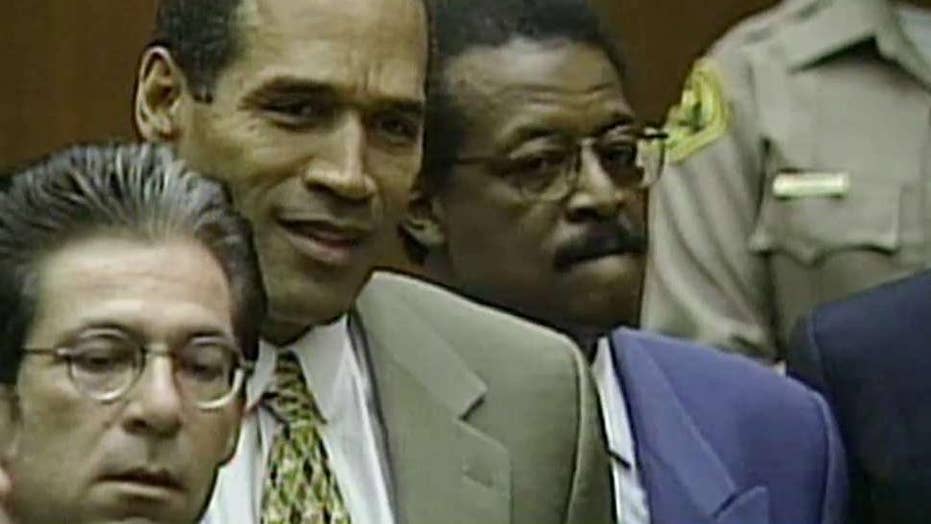 'Shepard Smith Reporting' looks back at the OJ Simpson case

Marking 25 years since the murders of Nicole Brown Simpson and Ron Goldman.

Twenty-five years after he savagely massacred his ex-wife Nicole Brown Simpson and her friend Ron Goldman – in front of the house where his two young children were asleep inside – O.J. Simpson is doing an end run around infamy.

The Butcher of Brentwood is now a star on social media, garnering a million Twitter followers in the space of a couple of days, a feat rivaling the seasons the former NFL great ran for over 2,000 yards in the snows of Buffalo.

We shouldn’t be surprised that so many are flocking to his Twitter account. It’s like a crowd that stops to check out the mangled corpses at an accident or crime scene. Even after the civil trial that found him liable for the bloody June 1994 double murders, and even after he was convicted in October 2008 of a Las Vegas armed robbery, he has always been perversely popular, both in and out of jail.

Almost always affable and charming – at least when he wasn’t wielding a combat knife – the one-time commercial pitchman with the easy smile and bemused, aggrieved air is a big-man on the Las Vegas campus.

When I try to assess why he has managed to hoodwink so many for so long, I’ve come to the conclusion that many really don’t care if he committed the murders.

After all, this is O.J., who’s like Ted Bundy on personality steroids. He’s the star of those endlessly repeating Naked Gun movies, and a golfer extraordinaire.

This is the man who, despite the mountain of evidence against him in the double murder trial, managed to convince a majority black jury and millions of African-Americans that he was the victim, not Nicole or Ron. Poor O.J., champion of underdog, abusive husbands everywhere.

He’s the man who triumphed over of a conspiracy involving supposedly “racist” cops and a stacked judicial deck. He’s the guy who avenged the Rodney King police beating when his lawyers made a fool of the LAPD. He’s King Con, who fooled millions with his telegenic charisma.

When I try to assess why he has managed to hoodwink so many for so long, I’ve come to the conclusion that many really don’t care if he committed the murders.

They care that he stuck it to the man with his criminal trial acquittal.

They care that he’ll be outrageous on social media, and maybe take on his own Enemies List.

They care that he’s a freak show for the digital age.

He’s good old O.J., as familiar as Charles Manson, exactly the kind of narcissistic psychopath who might provide a momentary distraction from the rigors of responsibility and good citizenship, a creep made for the dark web and social media, @ButcherOfBrentwood.