Compact sedan fans in cold climates finally have something they haven’t had in a while: A choice.

The 2019 Mazda3 joins the Subaru Impreza as the only two mainstream models in the segment available with all-wheel-drive, making them alternatives to small SUVs in four-season regions.

The all-new Mazda3 comes standard with front-wheel-drive and a 186 hp 2.5-liter four-cylinder that it shares with the all-wheel-drive model. It also comes with a six-speed manual transmission in hatchback versions that isn’t offered on the Snowbelt special, which gets the same number of gears in an automatic.

The Mazda3 features the brand’s so-called Kodo design language, with slim headlights, sleek, curvy bodywork, and just the right amount of chrome to highlight its best features. Parked next to an Impreza, Toyota Corolla, Honda Civic or any other sedan in its class, it pops like someone who showed up at the gym in a cocktail dress.

The cabin is equally chic, with a minimalist dashboard trimmed in upscale soft-touch materials and stitched leatherette. At a starting price of $24,920 for the all-wheel-drive model, the Mazda3 is as nice inside as a Tesla Model 3 that costs over $10,000 more.

The Mazda3 may not be an electric car, but it does have some very interesting tech. The all-wheel-drive system operates in concert with a feature called G-Vectoring control to take best advantage of the traction that is on tap. It uses sensors to predict how much grip is available at each tire, then distributes power accordingly to match how the car is being driven. Meanwhile, G-Vectoring imperceptibly uses the brakes to transfer weight forward when you enter a turn, shifting more of it on the front tires to expand their contact patches and make the car more responsive.

I didn’t get to drive it in the snow, but when driven hard or on wet surfaces the proof is in the puddles. The Mazda3 has a dynamic and sure-footed feel that delivers a sensation that’s missing from many similarly-priced vehicles and is very much in keeping with the company’s Zoom-Zoom philosophy.

It also rides comfortably and quietly. Most of the models it competes against use continuously variable transmissions that tend to cause their engines to operate in a groaning manner, but the Mazda3’s zippy, naturally-aspirated motor revs up and down through the gears in a pleasing way. The tradeoff for relying on a six pack of cogs is a 28 mpg combined fuel economy rating that seems middling compared to the less-powerful Impreza’s 32 mpg.

And while the two are roughly the same length on the outside, the Mazda3’s second row is snug. With six-footers in the front, folks the same size will not happily fit in the back. While other compacts have been vanity sized up over the years, "compact" still accurately describes the Mazda3.

The driver has much better accommodations, with a perfect seating position and clean instrument cluster to look at. High-end trim levels are equipped with a head-up display projected onto the windshield and radar cruise control that’s as effective on long highway slogs as it is in stop and go traffic. Automatic emergency brakes are standard across all Mazda3s.

MAZDA HAS A REVOLUTIONARY NEW ENGINE, AND IT'S NOT A ROTARY: 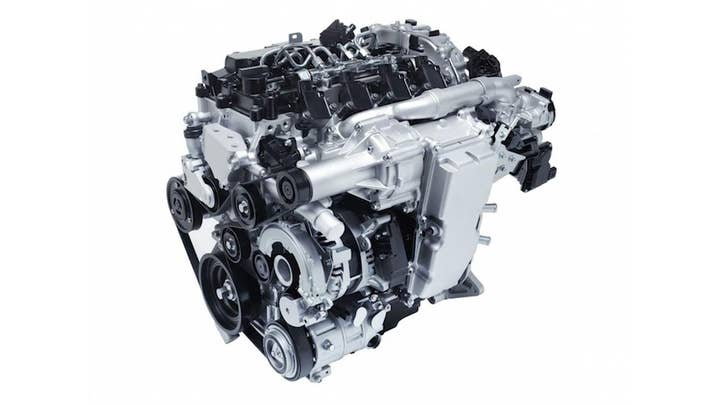 So is an 8.8-inch wide infotainment display that does without a touchscreen, requiring instead the use of knobs and buttons on the center console. Mazda says its research found this to be safer and more efficient, but it’s hard to not want to just press an icon on the screen sometimes, especially when you’re using Apple CarPlay or Android Auto, while the native Mazda interface is specifically designed to work with the remote controls.

One geeky feature you can adjust with them is the volume of the turn signal click, which seems like something every car should be able to do. Of course, Tesla takes things up a notch and lets you replace the click with a whoopee cushion noise, but I’m not sure that’s actually an improvement.

Overall, the Mazda3 is a big improvement over the outgoing edition, and the all-wheel-drive option certainly broadens its appeal. If style and sportiness matter more to you than size, it is definitely worth the looks you will no doubt be giving it anyway when one passes by.