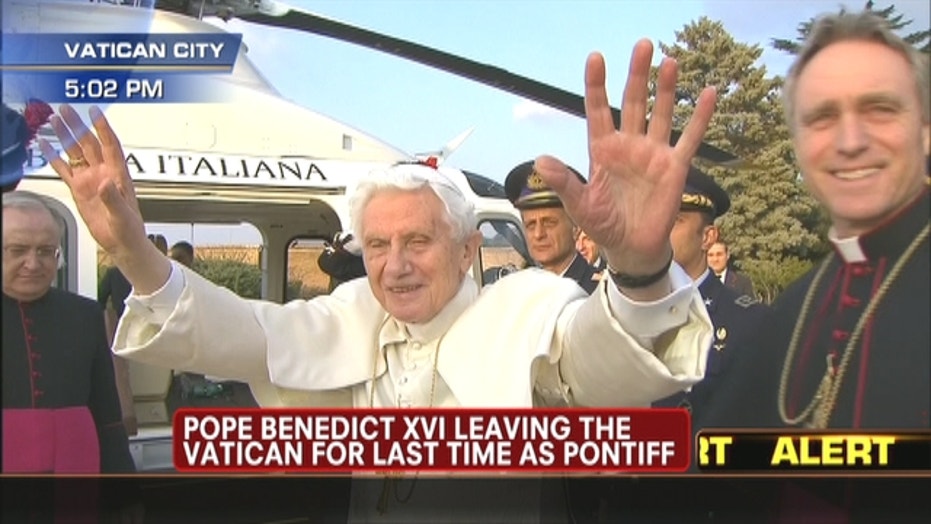 The Pope has left the Vatican City for the final time, travelling first by motorcade and then by helicopter to Castel Gandolfo.

Pope Benedict XVI officially became the first pontiff in 600 years to resign Thursday night in Italy, telling tearful well-wishers that he is beginning the final stage of his life as "simply a pilgrim."

The pope's journey into retirement began with an emotion-drenched sendoff from the Vatican, with Swiss Guards in full regalia standing in attention and prelates kneeling to kiss the papal ring — Benedict's closest aide weeping by his side.

Bells tolled as the pope left the Vatican by helicopter and circled St. Peter's Square, where banners reading "Thank You" were held up skyward for him to see. The bells tolled anew as he arrived in Castel Gandolfo, whose central piazza was jammed with people eager to catch the last glimpse of Benedict as pope.

Thank you for your love and support. May you always experience the joy that comes from putting Christ at the centre of your lives.

His arms raised, the aging Benedict appeared at the balcony of the palazzo where he will spend the first few months of his retirement. The crowds cheering wildly, he said he was happy to be "surrounded by the beauty of creation" on this unique day.

"I am simply a pilgrim beginning the last leg of his pilgrimage on this Earth," Benedict said, as well-wishers wiped tears from their eyes.

Benedict, 85, reached out to the wider world electronically, sending a final tweet from his Twitter account, @Pontifex, shortly before his departure from the Vatican: "Thank you for your love and support. May you always experience the joy that comes from putting Christ at the centre of your lives."

The day began with Benedict's final audience with his cardinals, where he pledged his "unconditional reverence and obedience" to his successor, a poignant and powerful message to close out his eight-year pontificate.

In an unexpected address inside the Vatican's frescoed Clementine Hall, the pope appeared to be trying to defuse concerns about his future role and the possible conflicts arising from the peculiar situation of having both a reigning pope and a retired one.

Benedict also gave a final set of instructions to the "princes" of the church who will elect his successor, urging them to be united as they huddle to choose the 266th leader of the world's 1.2 billion Catholics.

"May the College of Cardinals work like an orchestra, where diversity — an expression of the universal church — always works toward a higher and harmonious agreement," he said.

It was seen as a clear reference to the deep internal divisions that have come to the fore in recent months following the leaks of sensitive Vatican documents that exposed power struggles and allegations of corruption inside the Vatican.

The audience inside the Apostolic Palace was as unique as Benedict's decision to quit, with the pope, wearing his crimson velvet cape and using a cane, bidding farewell to his closest advisers and the cardinals themselves bowing to kiss his fisherman's ring for the last time.

Some seemed to choke up at that moment, and a few lingered on to chat with the pope for as long as they could. But the scene seemed otherwise almost normal, with cardinals chatting on the sidelines waiting their turn to say goodbye.

Benedict said he would pray for the cardinals in coming days as they discuss the issues facing the church, the qualities needed in a new pope, and as they prepare to enter into the secret conclave to elect him.

"Among you is also the future pope, whom I today promise my unconditional reverence and obedience," Benedict told the cardinals.

Benedict's decision to live at the Vatican in retirement, be called "emeritus pope" and "Your Holiness" and wear the white cassock associated with the papacy has deepened concerns about the shadow he might cast over the next papacy.

But Benedict has tried to address those worries over the past two weeks, saying that once retired he would be "hidden from the world" and living a life of prayer.

In his final speech in St. Peter's Square on Wednesday, he said he wasn't returning to private life exactly, but rather to a new form of service to the church through prayer.

And on Thursday he went even further with his own public pledge of obedience to the new pontiff.

The Vatican spokesman, the Rev. Federico Lombardi, said the pope's pledge was in keeping with this effort to "explain how he intends to live this unprecedented situation of an emeritus pope."

"He has no intention of interfering in the position or the decisions or the activity of his successor," Lombardi said. "But as every member of the church, he says fully that he recognizes the authority of the supreme pastor of the church who will be elected to succeed him."

The issue of papal obedience is important for Benedict. In his last legal document, he made new provisions for cardinals to make a formal, public pledge of obedience to the new pope at his installation Mass, in addition to the private one they traditionally make inside the Sistine Chapel immediately after he is elected.

Benedict's resignation will be a moment of quiet theater.

At 8 p.m. sharp, the Swiss Guards standing at attention at Castel Gandolfo will go into the palazzo and shut the doors behind them and go off duty, their service protecting the head of the Catholic Church over — for now.

Lombardi said the guards would change into civilian clothes and return to the Vatican barracks Thursday night. They will continue to guard the entrances of Vatican City and the pope's palace, "even if he's not there," said Cpl. Urs Breitenmoser, a Swiss Guard spokesman.

And on Monday, the cardinals are expected to begin meeting to set the date for the conclave.

Benedict's decision has been met for the most part with praise and understanding. Cardinals, Vatican officials and ordinary Catholics have rallied around him in acknowledgment of his frail state and the church's need for a strong leader.

But Sydney Cardinal George Pell has caused a stir by openly saying the resignation has been "slightly destabilizing" for the church.

In an interview with Australian Broadcasting Corp., Pell noted that Benedict himself had acknowledged the shift in tradition; Benedict said Wednesday that he appreciated his decision was not only serious but "a novelty" for the church.

Pell also said the church was in sore need of a strong manager — comments echoed by several cardinals who have noted the 30-year reign of two popes who paid scant attention to the internal governance of the church.

The Vatican tried to downplay Pell's comments, saying it wouldn't respond to individual cardinals and urging the media not to take advantage of churchmen who, it said, aren't necessarily media savvy.

Pope Benedict XVI delivered his final public words as pope on Thursday to well-wishers gathered at the papal vacation retreat in Castel Gandolfo south of Rome. Here is the translation of what he said, delivered to a roaring crowd:

Dear friends, I'm happy to be with you, surrounded by the beauty of creation and your well-wishes which do me such good. Thank you for your friendship, and your affection. You know this day is different for me than the preceding ones: I am no longer the Supreme Pontiff of the Catholic Church, or I will be until 8 o'clock this evening and then no more.

I am simply a pilgrim beginning the last leg of his pilgrimage on this Earth. But I would still ... thank you ... I would still with my heart, with my love, with my prayers, with my reflection, and with all my inner strength, like to work for the common good and the good of the church and of humanity. I feel very supported by your sympathy.

Let us go forward with the Lord for the good of the church and the world. Thank you, I now wholeheartedly impart my blessing. Blessed be God Almighty, Father, Son and Holy Spirit. Good night! Thank you all!

Hope for a Brazilian Pope

Sitting on a borrowed plastic chair as he awaited Benedict XVI's final public appearance as pope, Tiago Padilha speculated on what it would be like to have someone from his home country of Brazil lead the Church.

"If he comes from Brazil, it would be a big joy for a great people with great faith," he said, his 18-month-old son perched on his knee happily blowing soap bubbles. "That would develop even more the faith among the Catholic youth. That would be fantastic."

Brazilian Cardinal Odilo Pedro Scherer is believed to be to be a leading contender to succeed Benedict. Many believe that a pontiff from Latin America would help stem the losses in a region where 40 percent of the world's Catholics live.

In Argentina, Benedict XVI's final moments as pope were followed closely by the faithful in Buenos Aires' downtown cathedral.

Leaving Mass, Raquel Gonzalez and her friend Zuni Gimenez paused to dip their fingers in holy water and make the sign of the cross on their chests, then on each other's backs for good measure.

"It would be good if he's an Argentine, but I what would please me is that the coming pope does some good in this world," Gonzalez said of her hopes for the next in line. "That he achieves peace, and persuades those living with so much wealth to share more of it with the poor."

Catholic churches across the U.S. are opening their doors for prayer timed with the end of Pope Benedict XVI's reign.

At the Cathedral of St. Mary in Miami, school children will read from Benedict's writings, then blow out a candle in front of his photo at 2 p.m., the moment Benedict has chosen to step down.

At the same time, a Mass for the Election of a New Pope will be celebrated at St. Patrick's Cathedral in New York. The Archdiocese of Detroit is planning a holy hour of prayer from 1:30 p.m. to 2:30 p.m. in the Cathedral of the Most Blessed Sacrament. Boston Cardinal Sean O'Malley, who is in Rome and will vote in the conclave to elect the next pontiff, asked churches in his archdiocese to ring bells for eight minutes starting at 1:52 p.m. to honor Benedict's ministry.

The pope's retirement is echoing in Cuba.

President Raul Castro, 81, says he will step down in 2018, ending what would be 59 unbroken years of rule by him and his brother Fidel.

Resident Maria Delgado notes the pontiff's advancing age and scandals that have afflicted his papacy.

"I think it's very good for a person to resign when he's old and there are many problems he has been unable to avoid or resolve," says Delgado, a 71-year-old churchgoing retiree.

"If you feel you aren't capable, in shape, and there are a lot of problems, you should resign and better for someone else to come in who can fix things," Calle says. "I think that's great."

Benedict visited the island in March 2012.

From the steamy Caribbean to the chilly highlands, Colombia's nearly 5,000 Catholic parishes are ringing their bells in gratitude as the pope departs the Vatican.

The seemingly eternally conflict-ridden South American nation is nominally 90 percent Roman Catholic, although church leaders acknowledge that many are not observant.

Outside the parish in Bogota's lower-class 20th of July neighborhood, Florelia Buitrago, 62, had a request for Benedict.

"I ask the pope to help choose a new pope who won't betray the world, who will prevent wars and help us Catholics, because we Catholics are very poor," she said.