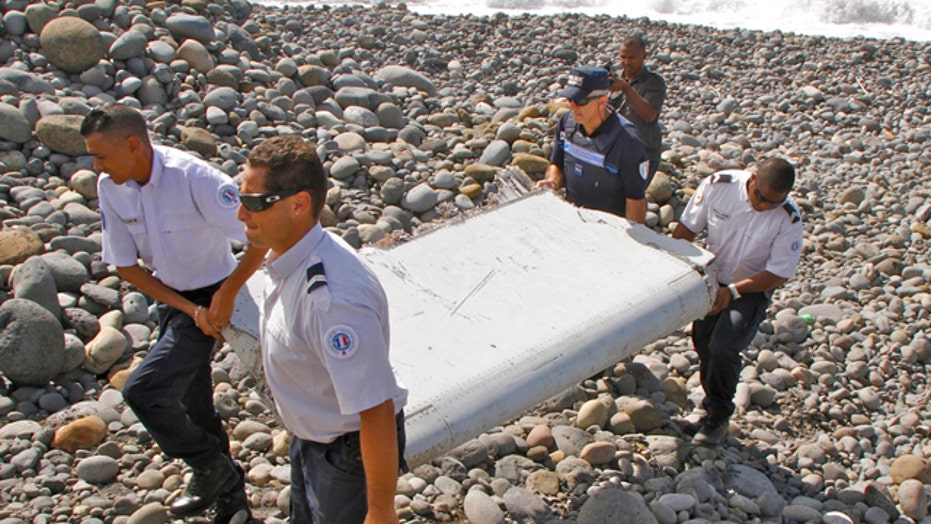 If a wing fragment found in the western Indian Ocean turns out to be part of missing Flight 370, experts say, there are probably other pieces of the aircraft that floated off rather than sinking to the bottom of the ocean. Finding them remains the hard part.

John Page, an aircraft design expert at the University of New South Wales in Australia, said the discovery of the fragment last week on Reunion Island leads him to conclude the missing Boeing 777 broke up, most likely when it hit the water nearly 17 months ago.

He said that while the main body of the plane is likely to have sunk, he thinks other small, lightweight parts attached to the wings and tail may have floated free and could still be afloat — pieces like the flaps, elevators, ailerons and rudders.

"I'm certain other bits floated," he said. "But whether they've washed up anywhere is another question. The chances of hitting an island are pretty low."

He said there's plenty of trash in the ocean, and even if somebody sailing past spotted something in the water, he or she may have no clue it was from the plane.

The discovery of the fragment, which has been taken to France, could be a significant development in one of aviation's greatest mysteries. Malaysia Airlines Flight 370 vanished in March 2014 while flying from Kuala Lumpur to Beijing with 239 people aboard.

Air safety investigators have identified the component as a flaperon from a 777. French and Malaysian investigators will begin examining the piece Wednesday to make sure that assessment is correct. They will try to confirm the flaperon is from Flight 370 and gather clues about what happened to the plane. Flight 370 is the only missing 777.

Authorities believe the plane most likely crashed offshore from Australia in the east Indian Ocean. Oceanographers say it's feasible the wing fragment floated thousands of kilometers (miles) in a counterclockwise direction across the ocean before washing ashore.

Page said the heaviest parts of the plane, like the engines, would sink immediately, while other parts might get spread out by the currents before sinking, forming a triangular-shaped debris field on the ocean floor.

He said flight-control surfaces on the wings and tail would be most likely to break off and float because they are essentially carbon-fiber skins filled with air, making them strong but lightweight. They're also designed to be waterproof, so moisture doesn't enter them and freeze during flight.

"What makes aircraft work are their light structures," he said.

Depending on how the aircraft broke up, Page said, it's possible other pieces could float. Those could include plastic and fiberglass trim, door panels, even personal belongings or luggage. He said it was unlikely any human remains would have survived very long.

Mark Tuttle, a professor in mechanical engineering at the University of Washington, said in an email that all structural materials used in transport aircraft are heavy enough they will sink in saltwater. He said the only time they will float, as he suspects is the case with the flaperon, is when a design feature like air trapped inside causes them to remain buoyant.

Geoff Dell, an air safety investigation expert and associate professor at Australia's Central Queensland University, said he, too, would expect the parts most likely to break free and float would be the flight-control surfaces. Many are attached to the plane only with hinges.

He said the amount of floating debris would be determined by the way the plane hit the water, which remains unknown. He said if it hit in an uncontrolled manner and at a high speed, the plane would likely break up more, allowing more debris to float. A more controlled landing, on the other hand, could result in more of the plane remaining intact and sinking, he said.

Dell said some parts of the plane that might initially float, such as a seat that broke free from the fuselage, could become degraded and saturated over time and eventually sink.

Michael Smart, a professor of aerospace engineering at the University of Queensland, said there was some reason for hope in the search.

"If one piece turns up, perhaps there's a likelihood that others will as well," he said. "It's strange to think you'd find one part that floated and nothing else."