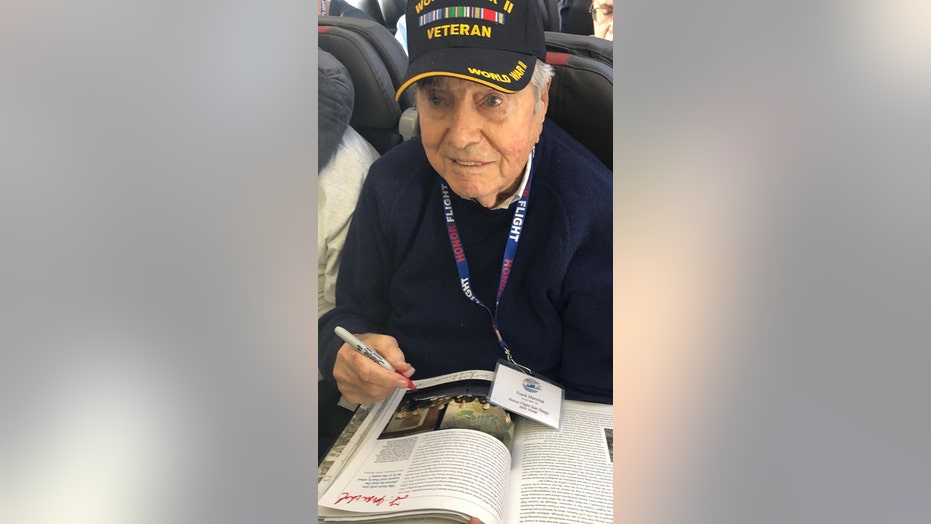 Frank Manchel, 95, was aboard the chartered American Airlines jet on Sunday when he collapsed and died about an hour before the plane landed in San Diego. Several people on the flight attempted to resuscitate the 95-year-old before pronouncing him dead, FOX5 San Diego reported.

"The fella who caught my dad came up to me and said, 'Listen, your dad, within 5 seconds of having him in my arms was gone,'” Manchel’s son, Bruce Manchel, told the news station.

Before his death, Manchel spent the weekend in Washington, D.C., on a trip sponsored by Honor Flight San Diego, which is part of a larger organization that offers all-expenses-paid travel for veterans.

"Frank Manchel was so excited to go on his Honor Flight. This trip was so special because he was able to be with both of his sons as well as his 93-year-old brother who met him in Washington, D.C.," Bruce said in a statement. "My father’s passing was the ending to the most amazing weekend, surrounded by his newest best friends. We thank all of you – Honor Flight San Diego, American Airlines, San Diego International Airport, friends, and supporters for your concern and for allowing the weekend to be so special for all of us to share together."

The other passengers draped an American flag over Frank Manchel after he died. The veterans stopped and saluted Manchel’s body before stepping off the plane on Sunday, FOX5 San Diego reported.

American Airlines also offered to cover costs to fly the veteran to his final resting place in Michigan.

The non-profit Honor Flight Network was founded to enable aging veterans to visit the National World War II Memorial, which was completed in 2004. The organization plans to eventually focus on Korean War veterans and then those who served in Vietnam.

Six other deaths have happened on Honor Flights originating from other cities.