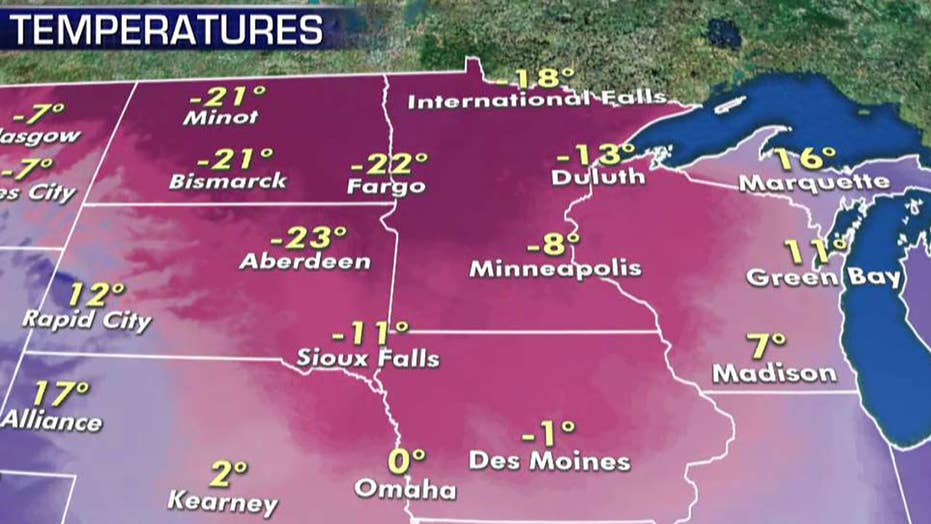 A wintry mess is brewing that will end up stretching from coast to coast.

The National Weather Service's Weather Prediction Center said a storm system bringing heavy snowfall to parts of the Pacific Northwest will reorganize by Friday over the Central Plains before taking aim at the Midwest. Moisture from the Gulf of Mexico will combine with Arctic air to allow a swath of heavy snow, sleet, and freezing rain across the region.

"That ice is going to be a big concern," Fox News senior meteorologist Janice Dean said on "Fox & Friends." "Big-time snow over the Upper Midwest Friday into Saturday and some of that is going to creep into the Northeast as well."

The active pattern setting up through the weekend is bringing a wide variety of winter weather impacts, especially in areas that have experienced warmer-than-average temperatures. An Arctic high moving in is bringing cold air that will "sink southward" toward the East Coast, according to Dean.

Wind chills well below zero were reported Thursday morning across the Midwest as the colder air arrived, setting the stage for the upcoming storm.

Wind chills well below zero were reported in parts of the Midwest on Thursday. (Fox News)

"We could see the potential for snow, and ice and rain, depending on where you live," Dean said Thursday. "We have multiple weather warnings across much of the country."

The NWS said that heavy snow is possible in portions of the Midwest, with several inches of snow expected as the system advances east. Between 5 to 9 inches of snow can be expected in Minnesota, where blizzard conditions may be possible on Saturday as winds gust to as high as 45 mph.

Winter storm watches, warnings, and advisories stretch across the middle of the country. (Fox News)

"This is expected to result in a fairly widespread area of travel difficulty over the central U.S. by Friday night, with very slippery roads and locally poor visibility," the WPC said.

The storm system is adding to already heavy snow totals in the Pacific Northwest, with an additional 2 feet of snow possible in the highest elevations of the Olympic Mountains, the Cascades and extending well south down across the Sierra-Nevada through Friday morning.

More than a foot of snow as reported Wednesday on parts of the Olympic Peninsula in Washington state.

Vehicles travel through the snow on Tieton Drive on Wednesday, Jan. 15, 2020, in Yakima, Wash. (Evan Abell/Yakima Herald-Republic via AP)

Strong winds that followed on Wednesday night knocked out power to thousands across the region, according to Q13 Fox.

Residents in Port Angeles, Wash., spent the day digging out from more than a foot of snow.

“I had this snowblower sitting gathering dust,” John Madden told Q13 Fox. “I bought it last year and it paid for itself in one day.”

There were numerous accidents also reported in highways in Oregon due to icy conditions, according to FOX12 Oregon.

In addition to snow in mountainous areas, heavy rain can be expected Thursday for coastal areas of Washington, Oregon, and into central California through the end of the week.

Impacts from coast to coast will be expected from this latest storm system. (Fox News)

"The heavy rain could produce isolated areas of flash flooding over parts of the Central California Coast," according to forecasters.