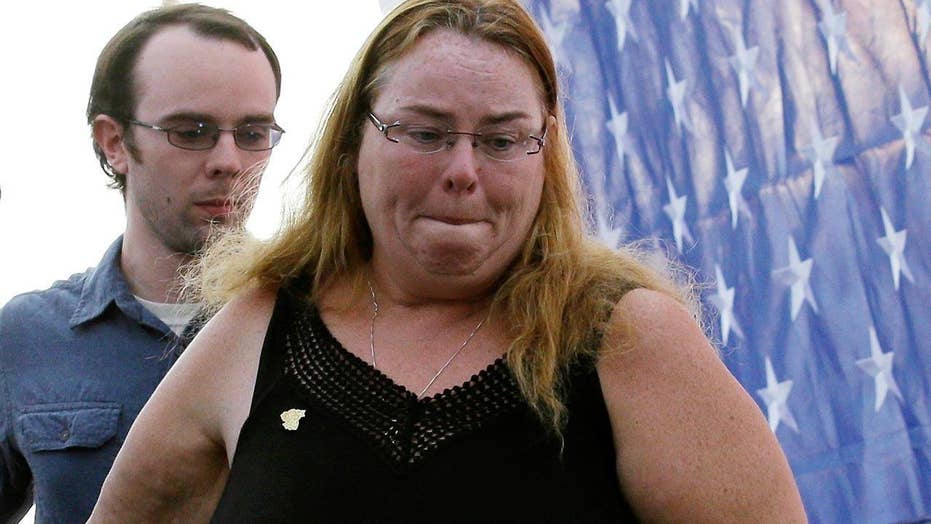 The wife of a disgraced Illinois police officer who staged his suicide to appear he was gunned down in the line of duty, sparking an intensive manhunt, pleaded not guilty Wednesday to charges she assisted her husband in siphoning money from a youth program.

Melodie Gliniewicz, 51, of Antioch, pleaded not guilty in Lake County court to two counts of money laundering and three counts of disbursing charitable funds without authority for personal benefit or use.

Her husband, Fox Lake Police Lt. Charles Joseph Gliniewicz, died Sept. 1. Authorities say he shot himself because he feared discovery of embezzlement from the Fox Lake Police Explorer Post, a program for teens interested in law enforcement careers. His death touched off a manhunt involving hundreds of officers and raised fears that several killers were on the loose.

Melodie Gliniewicz's lawyer entered the not guilty pleas on her behalf Wednesday. After Judge George Strickland explained she faced a potential sentence of up to seven years behind bars, she acknowledged she understood. The next court appearance for Gliniewicz, who is free on a $50,000 bond, was set for Feb. 26.

Neither she nor her lawyer, Don Morrison, spoke to reporters as they left the courthouse. In a statement after her indictment last week, attorneys for Gliniewicz vehemently denied that she took part in her husband's scheme.

Immediately after Joe Gliniewicz's death, he was hailed as a hero and praised for his work with the youth program. Melodie Gliniewicz's tearfully told hundreds of people gathered at a candlelight vigil that Gliniewicz had been her "hero" and her "rock."

Lake County prosecutors said in announcing the indictment of Melodie Gliniewicz that money from the explorer's account was used for expenses including more than 400 restaurant charges and a trip to Hawaii.

Authorities released incriminating text and Facebook messages in November showing a frantic Joe Gliniewicz discussing the money and ways he could evade discovery. An official with knowledge of the investigation identified Gliniewicz's wife and one of his sons, an Army soldier stationed in North Carolina, as the recipients of those messages. The official spoke to The Associated Press on the condition of anonymity because he was not authorized to discuss the probe publicly.

But investigators said last week they did not find evidence to charge the couple's son, 23-year-old son, Donald "D.J." Gliniewicz.