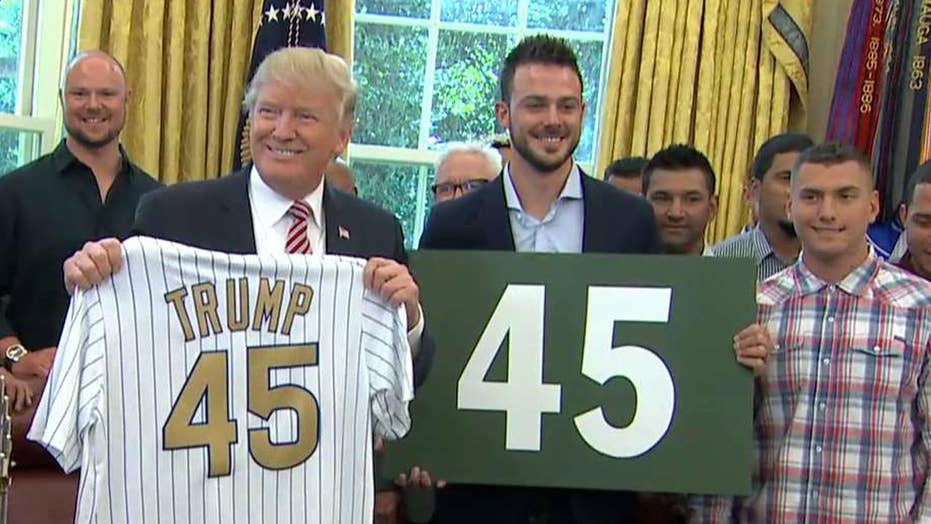 Video from the team's visit to the White House

Pro basketball star Kevin Durant grew up near Washington, D.C., but he’s in no rush to visit the White House if he and his teammates on the NBA champion Golden State Warriors get invited.

“Nah, I won’t do that,” Durant said Thursday, in an interview with ESPN. “I don’t respect who’s in office right now.”

It has become a tradition in the U.S. for championship teams to visit the sitting president, as baseball’s Chicago Cubs did in June when they met with President Trump.

But the outspoken Durant -- who recently apologized for negative comments about India after conducting a basketball clinic in the country -- accused Trump of helping to divide the U.S. rather than unite it. He added that many of his Warriors teammates feel the same way, the Washington Times reported.

“I don’t agree with what he [Trump] agrees with, so my voice is going to be heard by not doing that,” Durant said about declining a possible invitation to 1600 Pennsylvania Avenue. “That’s just me personally, but if I know my guys well enough, they’ll all agree with me.”

During a “Kevin Durant Day” parade in Maryland, Durant added that Trump had made hate “fashionable again,” with comments about last week’s violence in Chalottesville, Va., TMZ reported.

The league MVP, who infuriated fans of the Oklahoma City Thunder by leaving as a free agent in 2016 to join Golden State, said he agreed with other NBA stars, such as LeBron James of the Cleveland Cavaliers, who’ve recently criticized the president.

Normally, league champions stop by the White House when they play in or near Washington the following season. The Warriors are next scheduled to play in D.C. on Feb. 28.