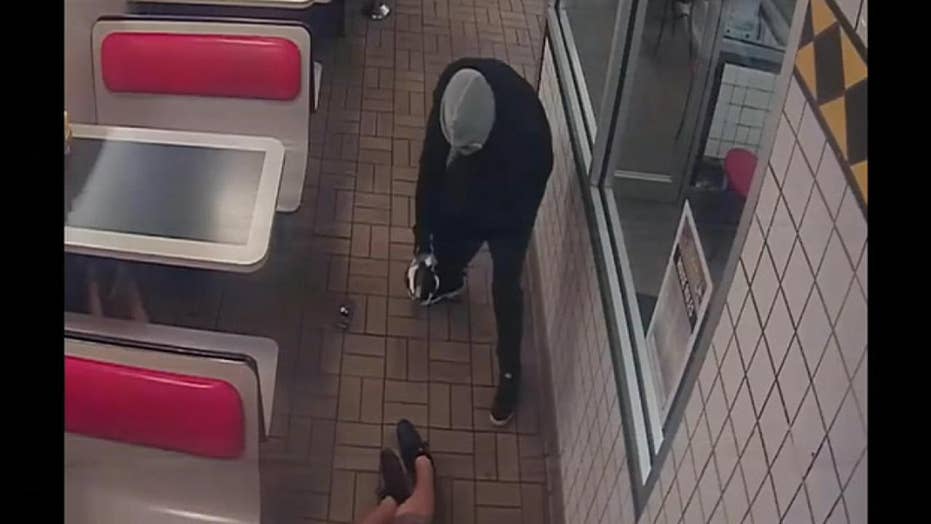 Houston police released surveillance video this week showing a violent Waffle House stickup in which a trio of masked armed robbers burst into the restaurant and forced customers to the floor.

The video captures the harrowing July 23 robbery that left those at the restaurant shaken, according to reports.

At one point one of the thugs is seen holding a handgun at a man’s head as he forces him out of a booth and onto the ground, the Fort Worth Star-Telegram reports. The customer is seen sliding what appears to be his cellphone and wallet across the floor to the robber, who stuffs the items in his pockets.

TEXAS STORE CLERK SHOT DEAD BY MASKED GUNMEN, INCLUDING ONE IN ALIEN DISGUISE, DURING ROBBERY

"They pointed the firearms at us and they told us 'Get on the ground,'" KTRK-TV quoted one of the victims as saying."[The men said] 'we need phones, we need your wallets, we need everything.' What felt like 10 minutes was actually only a two to five-minute ordeal before the three men were already gone."

Houston police said that after robbing the customers, the thieves forced the manager to open the cash register and took the money inside.

"They're all coming from a white pickup truck," Sgt. Tony Mora said, according to the station. “So, if you recognize someone that fits that description and has the same kind of vehicle, it's an older model pickup truck, that's something we can use."