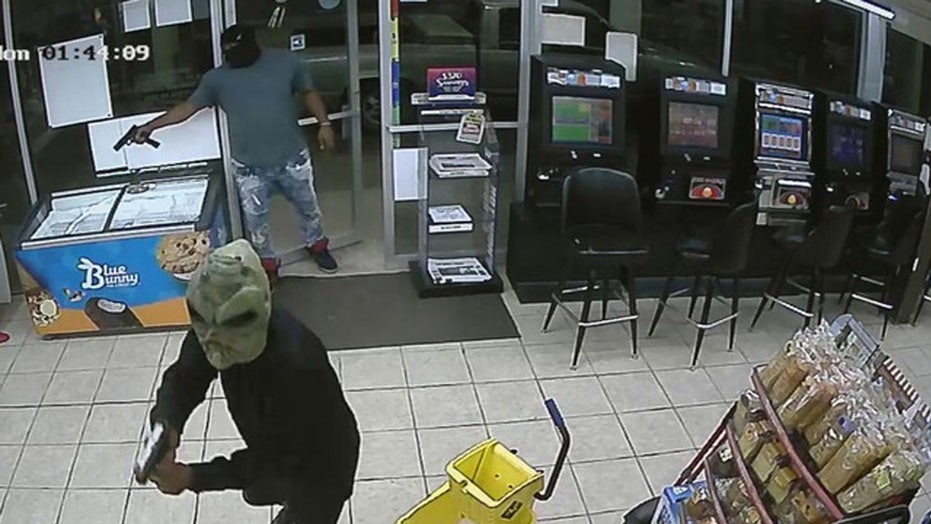 Authorities in the nation's fourth largest city are hunting a pair of killers – one of whom donned an alien mask – after a Texas convenience store clerk was shot and killed early Monday morning during a robbery.

The Houston Police Department said that two men entered a Valero gas station along Reed Road near Highway 288 at about 3 a.m. and fatally shot the clerk.

One suspect can be seen wearing an alien mask, while the other suspect's face was hidden by a more conventional black mask.

Two suspects, including one wearing an alien mask, were involved in the fatal shooting of a gas station clerk on Monday, according to Houston police. (Houston Police Department)

When officers arrived at the scene, they found the store clerk dead.

The incident happened around 3 a.m. on Monday at a Valero gas station near Highway 288 in Houston. (Houston Police Department)

Police told FOX26 the suspects may have fled in a black 4-door sedan, possibly a Nissan.

Officials tweeted a hazy photo of the vehicle.

Anyone with information is asked to contact Crime Stoppers of Houston at 713-222-TIPS.