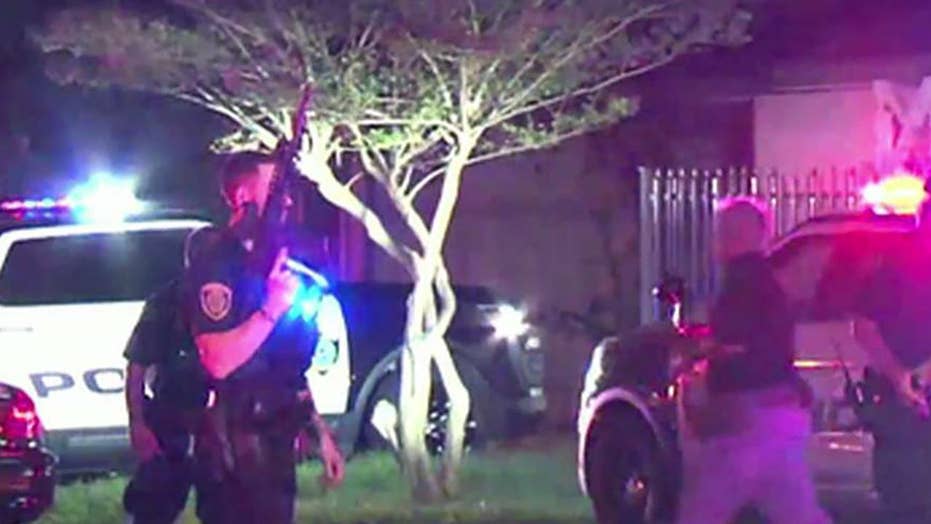 One suspect is dead, two are under arrest and a fourth is on the run after being accused of shooting a Houston, Texas cop.

A Houston police officer is in serious condition and one suspect is dead after a violent crime spree came to an end in a shootout just a mile away from the Democratic presidential debate Thursday night.

The injured officer, 29, was  still in surgery at Memorial Hermann hospital Friday morning after sustaining multiple gunshot wounds during a shootout on the 3900 block of Tristan at Scott -  just a mile south of Texas Southern University where 10 Democrats were rallying for stricter gun laws.

Authorities identified the victim as a six-year veteran with the Houston police force, whose father also served for 42 years, the Houston Chronicle reported. He was also said to be a graduate from the University of Texas at Austin.

Police said that the officer was not in critical condition but that he was not “out of the woods yet.”

Trouble began at around 9:56 p.m. on the 5800 block of Scott when 4 black males carjacked a man at gunpoint, FOX26 reported. The 2003 Chevy Tahoe, which eventually ran out of gas, was found abandoned at 6300 Tierwester.

Less than 15 minutes later, a priest was reportedly approached by the suspects on the 3600-block of Meriburr Street where he was robbed at gunpoint, assaulted and then robbed of his cellphone.

Police located one of the suspects near a shopping center at around 10:24 and chased him on foot.

One suspect was taken into custody while another opened fire, eventually striking an officer. He was taken to an area hospital where his current condition was not immediately known.

A second suspect was killed on the scene, a third was taken into custody and a fourth was still on the loose.