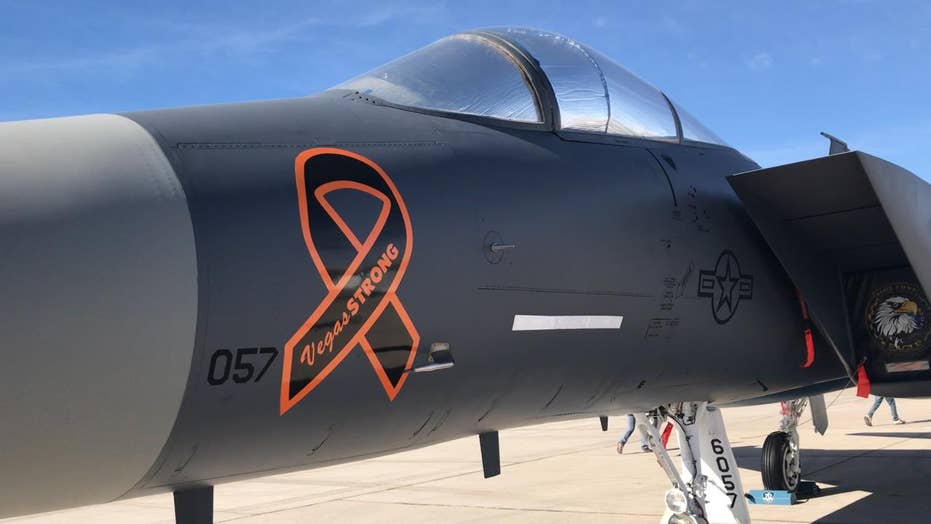 A fighter jet at Nellis Air Force Base in Nevada now is considered a work of art in tribute to the 58 victims who died in the Las Vegas shooting on Oct. 1. The aircraft is debuting to the public at Aviation Nation, an annual air show at the base.

The jet originally was going to be painted to honor the 70th anniversary of the Air Force, but when the tragedy happened, airmen decided to memorialize the event by treating a static, retired F-15 fighter jet as a canvas.

In just three short weeks, the plane’s paint job was complete, and it had to remain a secret among members of the base.

“The Air Force’s motto is adapt and overcome, and that’s what we did throughout the process. Everybody stepped up,” said Troy Blaschko, an aircraft painter.

He added, “We were very proud to be a part of this.”

The plane won’t be doing any flying, but will be on display for the duration of the air show, which is expected to draw over 400,000 people. It is one of the largest air shows in the western United States. Nellis Air Force Base is home to the Thunderbirds, the famous air demonstration squadron.

The base is integral to the wider Las Vegas community and was directly impacted by the shooting.

“We have some healing to do too. … The passion and the honor of the paint team and design crews as they put this airplane together piece by piece, and scrubbed it piece by piece with meticulous detail was all based on the honor of being able to give back something to the community,” said Major General Peter Gersten.

Around 20 people were involved in the project. Some of the motifs and images have a lot of detail. “Vegas Strong” is painted on the left fuselage, while also including the famous Las Vegas sign and the city’s skyline featured in other areas on the plane.

This wasn’t the only paint job Blaschko and his team undertook. On the opening day of the show, there was one surprise. The same painters also were tasked with a second job: painting Vegas’ new motto, “Vegas Strong” onto the tail of an F-16. This aircraft did fly for the spectators during the show, flying low enough so people on the ground could see it.

“I don’t think there’s anybody in the Las Vegas valley that did not know someone who was affected. We had a few hundred airmen at the concert at the time. … It’s been a community effort across the board,” Gersten said.