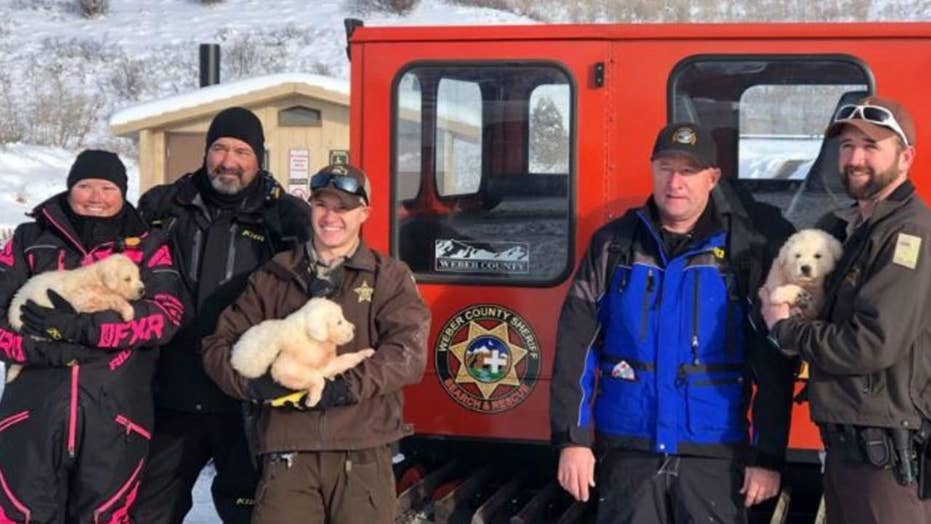 Adorable puppies rescued after being found on snowy mountain

A Utah couple went looking for a dog they spotted on a snowy mountain, but instead of finding the adult dog, they came across three Great Pyrenees puppies living inside a sheep carcass.

A Utah couple enjoying the newly fallen snow on Monte Cristo over the weekend is crediting “dumb luck” with having saved three young puppies they spotted living inside a sheep carcass.

Corey Holt and Kat Perry were snowmobiling on the Weber County mountain Saturday when Perry noticed an adult dog several miles into the backcountry, FOX13 reported.

“I’m not going to leave any animal on the mountain to starve, especially, it was obvious she had pups,” she told the station.

Holt and Perry returned the following day to try and find the dog and eventually spotted three “adorable” pups, five miles from the closest paved road, living inside a sheep carcass in the Ant Flat area that they believe all four animals had fed off of at some point.

"The pups were cold, shivering and wet and just a little ball of ice,” Perry continued.

The Weber County Sheriff’s Office Search and Rescue team was informed by Utah State Park officials that the pair was asking for help in recovering the stranded animals, which were later identified as three Great Pyrenees puppies.

The puppies were spotted living inside a sheep carcass.  (Weber County Sheriff’s Office Search and Rescue)

"We didn’t have a leash, we didn’t have a rope or anything so we decided the best thing was [to] get these guys out first and then go back in and try to get her,” he told FOX13.

They left behind five pounds of dog food.

Based on the breed, investigators believe the mother was a sheepherder that ventured off to give birth to her litter sometime in the summer.

The two male and one female puppies likely belonged to a larger litter.

Holt and Perry are working to find homes for the animals through the Hope’s Rescue group -- one of which might be their very own.