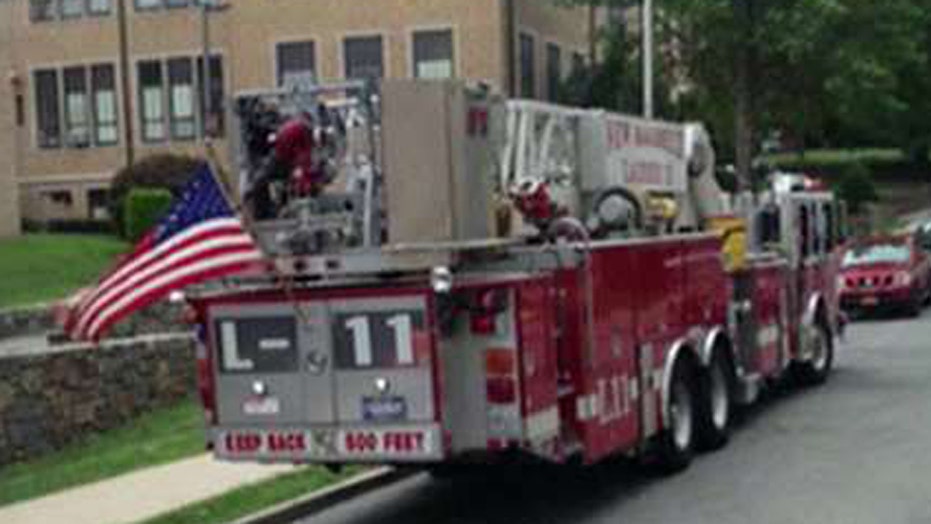 An upstate New York fire department was ordered to stop flying the American flag from trucks in the latest case pitting patriotism against protocol.

Firefighters from the Arlington Fire District in the town of Poughkeepsie were incensed when flags from three trucks were removed during a ceremony Tuesday, The Poughkeepsie Journal reported.

"If we had to take them down, they had to be taken down the right way," firefighters' union President Joseph Tarquinio told The Journal. "At the time when the country needs unity, to do something like this ... it's next to flag-burning in my mind."

The banners were installed on the trucks at the request of the union, but a divided Board of Fire Commissioners determined they could distract other drivers and expose the city to civil liability.

The flag flap followed a recent Rhode Island controversy, in which local firefighters were called "terrorists" for deciding to fly Old Glory on the back of their trucks. In June, firefighters in California were directed to remove a pro-police version of the American flag flying from their vehicles.

More similar to the Poughkeepsie incident was a 2012 case in Seminole, Fla., in which a resident complained that fire rescue vehicles were not displaying Old Glory under conditions set forth in the Federal Flag Code, the 1923 guide for handling and displaying the Stars and Stripes.

Flag Code §175 (b) states the flag "should not be draped over the hood, top, sides, or back of a vehicle or of a railroad train or a boat. When the flag is displayed on a motorcar, the staff shall be fixed firmly to the chassis or clamped to the right fender."

While the code is not binding, and each state has its own flag law, the code is widely cited by local authorities throughout the nation. It was not cited in the most recent case, although photos of the Arlington fire trucks appear to show the flags affixed to the left bumper.

Arlingotn Fire Chief Tory Gallante initially gave the nod for their installation, provided the flags were maintained properly, were safely mounted and the union paid for them. Gallante said a mechanic checked the flags to make sure they were mounted correctly.

Three members of the five-person board, which was apparently not consulted about the decision, wanted the flags removed, citing "liability" issues and a possible "distraction" to other motorists.

"This past Saturday I saw one of our pumpers on Hooker Ave. going to a call. It had a physical flag mounted to the back of it. None of the board was aware, or consulted that these flags were being affixed to the apparatus," said Arlington Fire Commissioner Chairman Jim Beretta, one of the board members who wanted the flags removed.

No formal vote was taken on the matter. Instead the directive was issued based on the majority supporting the flags' removal, The Journal reported.

"I think (for) a lot of people ... (the issue) crosses political lines, moral lines, religious lines," Tarquinio said. "It's the flag of this country."