Authorities in North Carolina recover the body of Kaiden Lee-Welch after he was ripped from his mother's arms by rushing waters; Jonathan Hunt reports.

Two women who were being transported from one mental health hospital to another drowned when the medical van they were in was swept away by Hurricane Florence floodwaters in South Carolina, officials said.

Two sheriff’s deputies who staffed the vehicle attempted to extricate the two women, but were unable to open the doors as the floodwaters rose rapidly, the sheriff’s office said in a statement, according to WPDE-TV.

A high water rescue team arrived at the scene and was able to rescue the two deputies from the top of the van, but was unable to reach the two victims.

“They were trying to negotiate through fast-running water, and it just didn’t work out,” Jerry Richardson, Marion County coroner, told the Associated Press.

Little Pee Dee River is one of the bodies of water officials in South Carolina are watching closely as water continues to pour into the state from North Carolina following the heavy rains of Florence.

Fox said the incident is under investigation by state police. The women’s names have not been released and the two deputies were sent to a local hospital for observation.

“Tonight’s incident is a tragedy. Just like you, we have questions we want answered,” Horry County Sheriff Phillip Thompson told WPDE-TV. “We are fully cooperating with the State Law Enforcement Division to support their investigation of this event.” 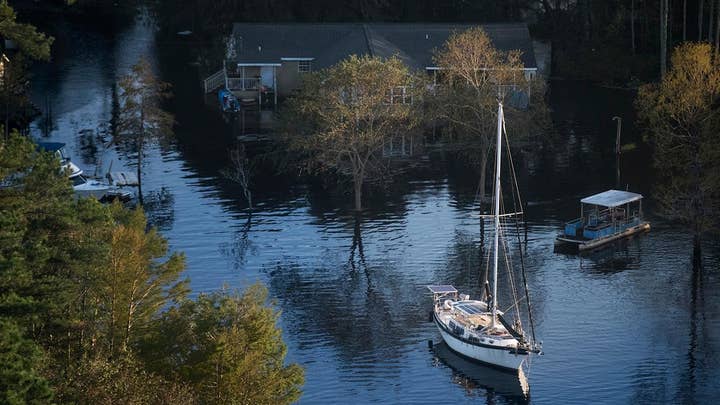 More than 35 people have lost their lives since Florence made landfall as a Category 1 hurricane late last week.

Among the dead is 1-year-old Kaiden Lee-Welch, whose body was found Monday after he had been swept from his mother’s arms by rushing floodwaters in Monroe, N.C. The boy’s mother, Daize Lee, was rescued.

"I couldn't hold on anymore, and he let go," Lee told Fox 46 Charlotte.

She told WSOC-TV that they were in Union County visiting family.

“When water came in, I was trying to calm my son. He was confused, that's all he was. He was just confused but I told him it's OK, don't panic, even though I was panicking, I told him don't panic," Lee told the station.

Forecasters predict some rivers in the northeastern area of the state might not reach their highest levels until later this week or next week.