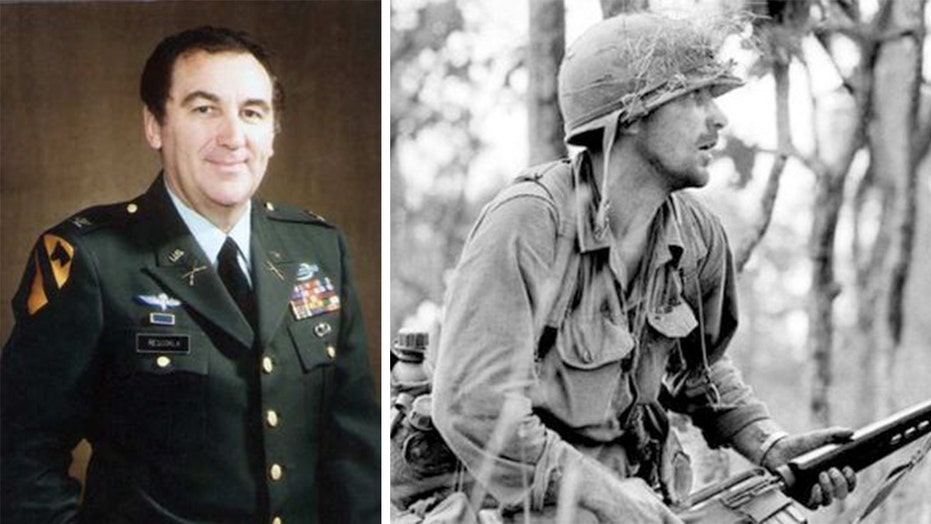 “On behalf of the entire nation, I pledge we will forever and ever memorialize this American hero," the president said.

The U.K.- born Rescorla worked as the director of security for Morgan Stanley, which had its headquarters in the South Tower of the World Trade Center. Following the 1993 bomb attack on the Trade Center, Rescorla designed and implemented evacuation drills to prepare employees for another attack.

Rescorla was born in Cornwall and served in the British army in Cyprus. He also worked as a policeman in Rhodesia (now Zimbabwe) before coming to America at the age of 24. He enlisted in the Army and fought in Vietnam before leaving active duty in 1967. He then studied at the University of Oklahoma, earning a bachelor's degree in creative writing and a master's degree in English. He also earned a law degree from Oklahoma City University and taught at the University of South Carolina. He retired from the Army in 1990.

"Rick realized he would not be happy if he was not protecting others," Trump detailed.

In Vietnam, Rescorla became known for singing Cornish and Welsh hymns during times of crisis.

"We were all sitting in our holes with our knees knocking, we have dead guys all around us, and here comes Rick singing Cornish songs," Sam Fantino, who served with Rescorla in the battle of la Drang near the Cambodian border, said in 2015 when a conference center at Fort Hood, Texas was dedicated in Rescorla's name, according to Military.com.

After the first plane hit the towers on 9/11, Rescorla ordered Morgan Stanley employees to get out of the South Tower and ignore building announcements telling people to stay at their desks. As he directed workers in the stairwells, Rescorla went right on singing his hymns. One of Rescorla’s last phone calls was to his close friend, Dan Hill, who he had known since his days in Rhodesia. Rescorla told Hill to get to New York to help with the aftermath of the attack.

Rescorla then resumed singing a hymn, Hill told the New Yorker magazine in 2002.

"Everybody said, 'Rick your folks are out. You've done what you need to do,' but he pointed up the stairwell and said, 'You hear those screams? There's more people up there. I have to help get them out,'" Lt. Col. Andrew Watson said at the conference room dedication, as reported by Military.com. He said he would run to safety only once he had gotten everyone in the building out.

Rescorla was last seen climbing up the stairs on the 10th floor of the South Tower. He is credited with saving nearly 2,700 people that day. He was 62 when he died.

Rescorla's wife Susan, who has spent the last 18 years preserving her late husband's memory, accepted the honor from Trump.

"Of all the accolades… and all the people along the journey who have touched my life, each is so memorable because I was able to learn more about this incredible man than I had during our short time while he was here on earth," she said. Susan and Rick had been married for fewer than three years at the time of his death.

In his remarks, the president recalled Rescorla's last words to his wife, spoken in a phone call from the South Tower: "I've never felt better in my life. I love you so."