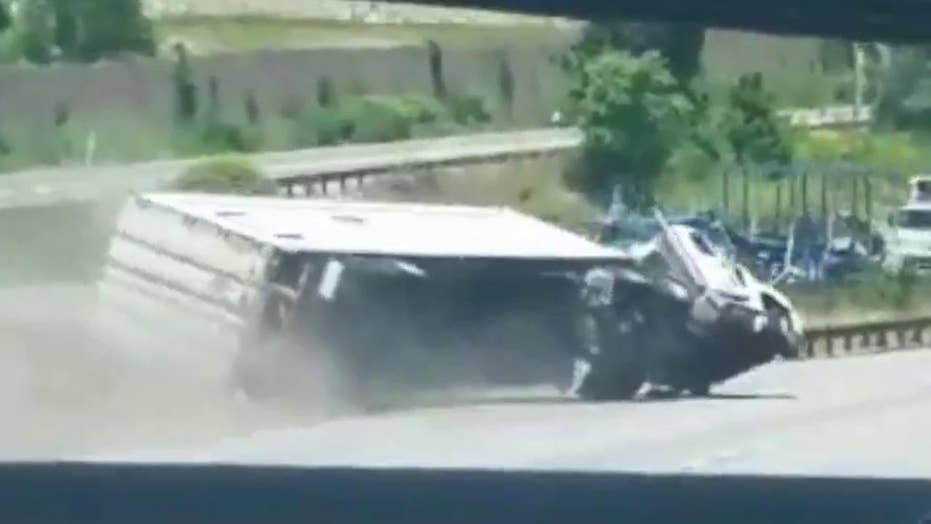 Truck flips on highway, good Samaritans rush to save driver

A video captured a few good Samaritans rescuing a driver who crashed his tractor-trailer on a Pennsylvania interstate on Monday.

The video, captured by Victor Alarcon, who was driving behind the tractor-trailer on Interstate 476 in Broomhall, showed the large truck swerving into the next lane before failing to correctly turn while driving under an overpass, causing it to overturn.

The crash caused the truck to spill its contents onto the highway and authorities had to close the road for a few hours, ABC 6 reported.

A few people, including Alarcon and his father, rushed over to the truck and took immediate action by pulling back the truck’s windshield so the driver could get out. Alarcon said the driver was non-responsive.

“We couldn’t get an answer from him,” Alarcon told ABC 6. “Even though we keep calling him, ‘Are you ok? Are you ok?’ He didn’t answer.”

When first responders came to the scene, they extracted the man, who was breathing, from the truck, Alarcon said.

Pennsylvania State Police said the driver was hospitalized but is expected to recover. The cause of the crash is under investigation.