Dozens of storms and tornados in the Midwest damaged multiple buildings in their path Tuesday -- including a racetrack grandstand -- but were expected to weaken by Wednesday.

Another storm gathering steam could potentially cover an area from Texas to Chicago, the National Weather Service said. Missouri and parts of Illinois already have been hit with severe weather in the second consecutive day of severe storms and were blamed for at least two deaths.

St. Louis was largely spared from the powerful storm system, but the Cardinals baseball team called off its Tuesday game against its cross-state rival Kansas City Royals as rumbling of a storm could be heard downtown. The city's Lambert Airport shut down for an hour Tuesday but resumed flights a short time later.

'TORNADO ALLEY' AND OTHER THINGS TO KNOW DURING TORNADO SEASON 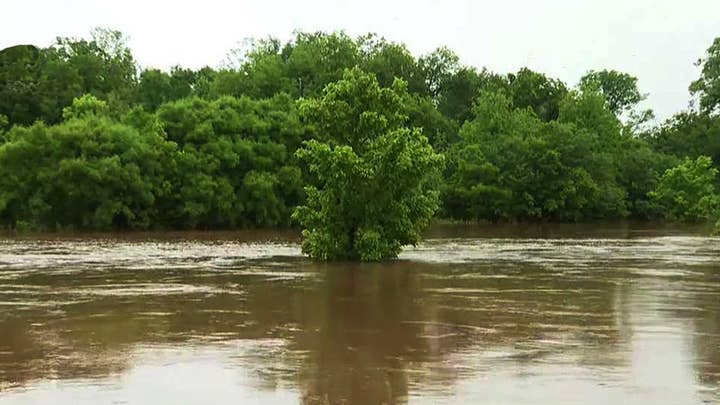 An SUV skidded across the center of U.S. 160 and struck a tractor-trailer amid heavy rain near Springfield, Mo., killing both people in the SUV, investigators said.

Twisters in Missouri slammed a drive-thru wild animal park, and buildings at the Wild Animal Safari near Strafford were damaged but no one was injured. All animals had been accounted for.

Storms flipped campers at Lucas Oil Speedway in Hickory County and the venue's grandstand was destroyed. Racing for the weekend was canceled, which was expected to draw around 3,000 campers.

"The very heavy rainfall yesterday and today, combined with saturated soil and very high water levels on many rivers and streams have created dangerous conditions around the state," Parson said in a statement.

Near Joplin, Mo., an 18-year-old woman was swept off a flooded road Monday and stranded overnight until residents heard her yelling. She suffered minor injuries.

The Missouri River is expected to reach significant flood levels by the end of the week in parts of the state.

Oklahoma also experienced flooding, prompting officials to shut down Interstate 40 in El Reno, located 25 miles west of Oklahoma City. The National Weather Service said five inches of rain had fallen since Monday. In El Reno and Stillwater, home to Oklahoma State University, people were being rescued from their homes in areas hit hard by flooding.

A house damaged in a tornado Monday in Mangum, Oklahoma. (AP Photo/Sue Ogrocki)

Passengers in Tulsa International Airport were moved into shelters for around 30 minutes Tuesday and many flights were either delayed or canceled.

Rescue crews saved a man pinned under a tree, said Tulsa Area Emergency Management spokeswoman Kim MacLeod. In Arkansas, crews were working Tuesday to rescue a woman trapped under a tree toppled by strong winds. She was alert and talking, the state Department of Emergency said.