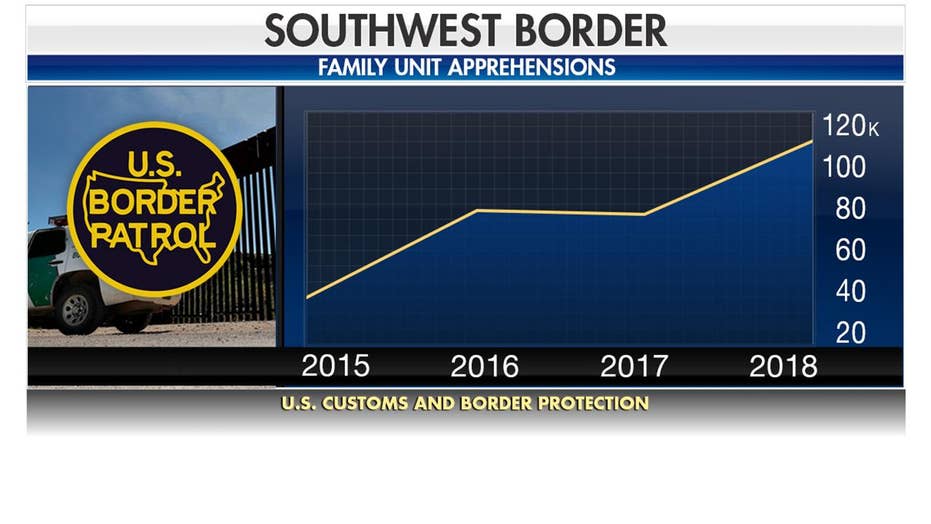 In El Paso, a Texas border town already taking in dozens of migrants a day, ICE said it may have to release 500 people a day to relieve the overcrowding situation at federal detention centers.

Non-profit organizations in Texas, like the Annunciation House, are finding themselves scrambling to find housing for the immigrants. The house has taken the lead in connecting the migrants to a network of 20 shelters it operates, which include high school gyms and places of worship.

“Over the past two, three months, the volume of families, individuals being released has increased,” said Ruben Garcia, Annunciation House director.

After migrants are arrested by Customs and Border Protection and given a court date by immigration officials, they are released. Many of the immigrants don't stay in the border cities and instead often leave by bus or plane to meet friends, family members, or sponsors in different parts of the country.

Due to federal guidelines, the city is unable to activate a shelter unless a state of emergency is declared. So far, the city's role has been limited to providing security and transportation on public transit for migrants.  (KFOX)

Still, the growing number of immigrants getting dropped off in the border towns is straining resources.

Last week, ICE dumped hundreds of migrants into the streets of El Paso, drawing criticism from immigration activists and shelters. Garcia said ICE usually gives them advance notice prior to releasing migrants – but did not do so in this case.

“I think that it’s important to state that it is unacceptable to release families with children, some of them very young children to the street. That, we have to say, is non-negotiable. That is simply not acceptable,” said Garcia.

ICE has defended the practice, saying that a spike in border crossings is giving the agency few other options.

“Due to the rising influx of family units crossing the border, NGOs have expressed they are over capacity and cannot accommodate all the family unit releases,” the agency said in a statement.

The majority of migrants stay in El Paso for 24 to 96 hours before leaving to meet with friends, family, or sponsors in different parts of the country.  (Fox News)

The agency added that due to a decades-old court agreement called the Flores Settlement, it can only detain families for a limited period of time before eventually being forced to release them.

The immigrant dumping is not only happening in Texas. In Arizona last Thursday, 80 migrants were dropped off at a Phoenix Greyhound bus station.

University of Texas at El Paso Political Science Professor Todd Curry said he believes the deaths of two children in Customs and Border Protection custody last month is contributing to the spike in releases.

“They [ICE] don’t want it to happen again. And, they don’t have the infrastructure to handle it. So, they’re getting rid of it,” Curry said.

ICE has denied that is the case.

The number of releases tends to fluctuate – but officials in El Paso said they have not experienced the numbers they are currently seeing.

Releases averaged about 200 a week in January and February last year, and there have been surges in the past as well—one in 2014 and another in 2016. Garcia said because of the uptick in border crossers, ICE has increased the number of releases.

Central American migrants, who were dropped off at a bus station by U.S. Immigration and Customs Enforcement (ICE), walk toward volunteers helping them with food and transportation to emergency shelters in El Paso, Texas, U.S. December 25, 2018. REUTERS/Jose Luis Gonzalez

“I think this has historically been the relationship, that if people are rising to the border, well then your flow of releases mirror that,” said Garcia.

Department of Homeland Security spokesperson Katie Waldman said in a statement, “Since 2015, we have seen a 169 percent increase in family units crossing the border. There has been a 110 percent increase in males traveling with children over the last two years.”

Experts said the Texas-Mexico border has long been a favored point of entry for illegal immigrants.

Annunciation House has expanded its network to at least 3,000 beds a week. So far, the organization, which is supported solely by donations and does not accept state or federal funding, said it has been able to meet the costs of housing the migrants. They’ve been spending up to $150,000 a month for hotel costs.

The organization provides a service that the city is unable to meet.  Due to federal guidelines, the city can’t activate shelters for the migrants. It can only do so during emergencies, which the state has not yet declared.

So far, the Office of Emergency Management has limited its responsibilities to providing cots at pop-up shelters and coordinating security and transportation on public transit buses.

“Our best support is to give the Annunciation House, the NGO’s, what they need to be able to maintain this operation,” said El Paso Fire Chief Mario D’Agostino during a special city council meeting this week.

City officials said while it has been handling the influx of migrants so far, it doesn’t know how much longer it could continue taking in so many people.

“I don’t know,” Margo said, “how we’re going to withstand that on a continuing basis.”