A Texas Department of Public Safety pulled over a white Transit van, the trooper found 14 illegal migrants on board.

Two human smuggling operations involving more than two dozen migrants in the country illegally were foiled by the Texas Department of Public Safety last weekend during traffic stops as part of Operation Lone Star, the agency said on Saturday.

Operation Lone Star was launched as a border security initiative in response to a surge in illegal border crossings through Texas and President Biden's immigration policies.

In the first incident, a pickup truck led a DPS trooper on a high-speed chase following an attempted traffic stop in Val Verde County for speeding on US-277 last Sunday.

The driver then crashed into a ranch fence and continued driving down a dirt road before getting out of the truck and hiding in the brush. The driver and 13 migrants in the country illegally were taken into custody with the help of a U.S. Border Patrol K-9.

The passengers were identified as Mexican nationals in the country illegally. The driver, identified as Eduardo Rodriguez Velasquez, was attempting to smuggle a total of 13 migrants into the country, DPS said.

The migrants were turned over to U.S. Border Patrol.

In a separate incident on Sunday, DPS troopers found 14 migrants inside a transit van that a trooper stopped along US-90. The driver initially claimed he saw the passengers jump out of a vehicle in front of him, so he was giving them a ride to a Border Patrol station or DPS office. 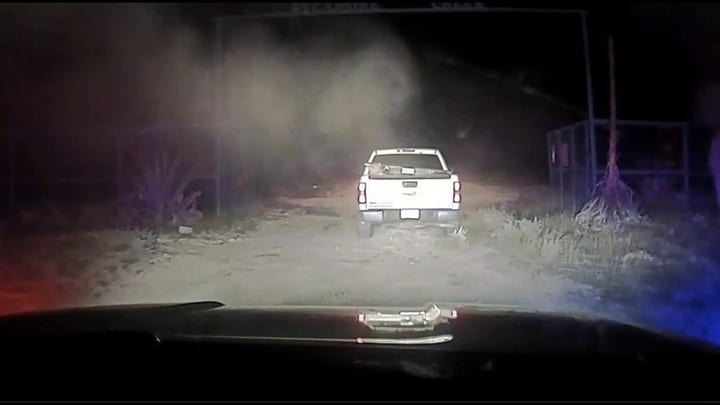 After his story was found to be "inconsistent," arriving troopers and Border Patrol agents found 14 migrants inside the van, including two children.

The driver, identified as Joshua Hernandez, was arrested for smuggling of persons and possession of marijuana.

In Kinney County on Sunday, troopers found 14 migrants in the country illegally inside a suspected smuggler's van.  (Texas DPS)

"Through Governor Abbott’s Operation Lone Star, as of November 17, 2022, the Texas Department of Public Safety has made over 22,000 criminal arrests, over 5,600 criminal trespass arrests, and have encountered over 328,000 illegal immigrants," DPS said in a statement. "DPS has experienced an uptick in human smuggling including the smuggling of juveniles. As criminal smuggling organizations continue to expand their criminal network by recruiting drivers throughout the State of Texas and out of state for human smuggling. Human smuggling is a multibillion dollar industry in which illegal immigrants are forced into indentured servitude."