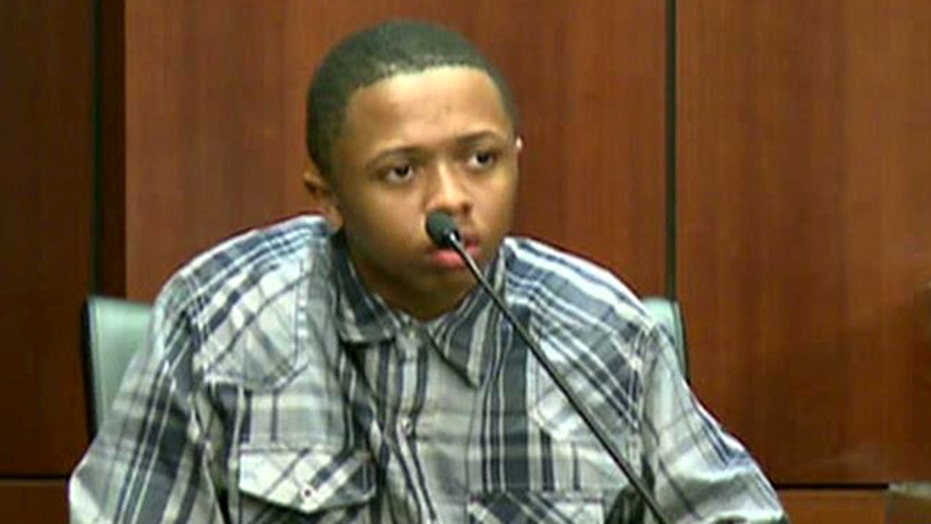 Trial resumes for first of 2 teens charged in baby's murder

MARIETTA, Ga. – An 18-year-old man accused of fatally shooting a baby in a stroller during a robbery attempt in coastal Georgia twice counted down from five and threatened the baby before the deadly shot, his teenage co-defendant testified Thursday.

Dominique Lang took the stand at the murder trial of De'Marquise Elkins, who is accused of shooting 13-month-old Antonio Santiago on March 21. Police say the 15-year-old Lang was an accomplice, and he is also charged with murder and will be tried at a later date.

The killing in the port city of Brunswick, not far from Savannah, drew national attention, and the trial was moved to the Atlanta suburb of Marietta owing to extensive publicity. Elkins faces life in prison if convicted of murder. At the time of the shooting he was 17, too young to face the death penalty if convicted under Georgia law.

Prosecutor Liberty Stewart asked Lang to recount for jurors his actions the day of the killing.

Lang said he ran into Elkins that morning, and the older teen asked if he'd ever robbed anyone. Lang said he told Elkins he hadn't. A bit later, as the two were walking side by side down a street, they saw Sherry West down the block with a baby stroller. West and her child were returning home from the post office, authorities have said.

Elkins asked for the purse again and West refused again, and Elkins began to count down from five again, Lang said. West still refused to give up the purse, and Lang said Elkins walked around the stroller toward her and shot at the ground and then shot West in the leg and asked for the purse again. Lang said he wasn't sure what happened next but said Elkins had been pointing the gun at the baby and Lang heard a third shot. Then both teens took off running.

Bystanders and rescue workers were unable to revive the child, who was pronounced dead at the scene, authorities have said.

During cross examination by Jonathan Lockwood, a defense attorney for Elkins, Lang said he didn't actually see Elkins shoot the baby but that he heard a third shot.

Lockwood went through a transcript of what Lang told police the day after the shooting, pointing out some inconsistencies and getting the teen to admit to lying more than a dozen times.

During questioning by Lockwood, Lang sometimes refused to answer questions -- sometimes glaring at Lockwood -- until the judge ordered him to respond.

Lockwood also asked Lang repeatedly if he'd reached a deal with prosecutors in exchange for his testimony.

"Ain't no deal or no promise," Lang said.

During a conference between the judge and lawyers while jurors were out of the room, prosecutor Andrew Ekonomou said emphatically that there was no deal.

But Wrix McIlvaine, a defense attorney for Elkins' mother, pushed further in asking Lang why he would agree to testify and to admit to being there when the baby was shot if there was nothing in it for him. Lang continued to insist that prosecutors didn't offer him a deal or make promises but said they'd see how it went and wished him good luck.

Defense attorneys also seemed to suggest when they were questioning Lang that it was a cousin who was with him at the time of the shooting and that Elkins wasn't there at all.

Jurors also heard testimony from two police investigators, saw part of a video of Lang re-enacting the shooting for police the day after the shooting and a video of Elkins being interviewed by police.