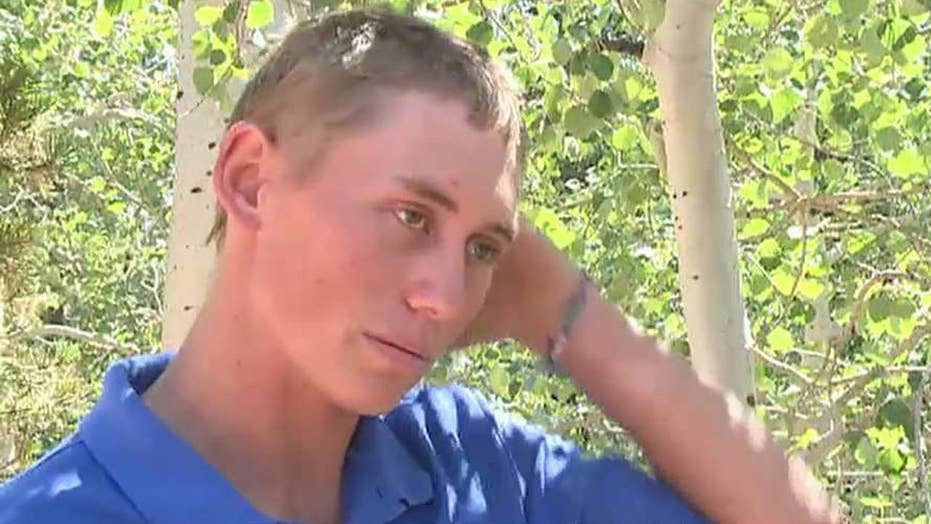 Teenager says he woke up to bear gnawing on his head

A teenage staffer at a Colorado ranch described waking up Sunday morning to find a black bear gnawing on his head — and trying to drag him away.

The 19-year-old, identified only as Dylan, told Fox 31 Denver he "woke up to a crunching sound and me being drug" out of his sleeping bag at Glacier View Ranch near the town of Ward, 48 miles northwest of Denver.

"I thought it was a dream at first, then I realized it wasn’t," said Dylan, who quickly realized that the crunching sound was the bear’s teeth biting into his skull.

Dylan said the bear dragged him about ten feet out of his sleeping bag as he struggled to free himself.

Colorado Parks and Wildlife spokeswoman Jennifer Churchill told the Associated Press the teen punched and hit the bear while other staffers who were sleeping nearby yelled and swatted at the wild animal, which eventually left, she said.

“I grabbed a hold of the bear by his ear and I found his eye and I was poking it. It just let go of me and I was able to get away,” Dylan said.

The bear took off, but not before leaving Dylan with gashes on his head that required nine staples to close. No other injuries were reported.

Dylan and the other staffers were near teepees where 12- and 13-year-old campers were sleeping.

Dylan teaches wilderness survival at the camp, which is owned by the Rocky Mountain Conference of Seventh Day Adventists. He told Fox 31 that his survival skills saved his life.

""Make sure you don’t have food in the camp. We didn’t. But still. Except me. I must have smelled really good or something," he joked.

Black bears aren't usually aggressive but have attacked several people in the West in recent weeks.

A woman and her dogs were attacked on Tuesday after they apparently surprised an adult bear and her cub in a huckleberry patch in the Idaho Panhandle National Forests.

Sixteen-year-old Patrick "Jack" Cooper of Anchorage was killed after he got lost and veered off a trail during a mountain race south of Anchorage. Mine contract worker Erin Johnson of Anchorage died and her co-worker was injured in a mauling about 275 miles northeast of Anchorage.

Black bears will defend their young and have been known to paw and bite tents with food inside. After the Colorado attack wildlife officers did not find any food that would have attracted the bear so they have set bear traps in the area and plan to continue a search for the bear with scent dogs on Monday.

The bear's behavior was so atypical that any bear found in the traps in the next few days will likely be euthanized and officials will test later to see if it was the same bear involved in the attack using DNA evidence, Churchill said.