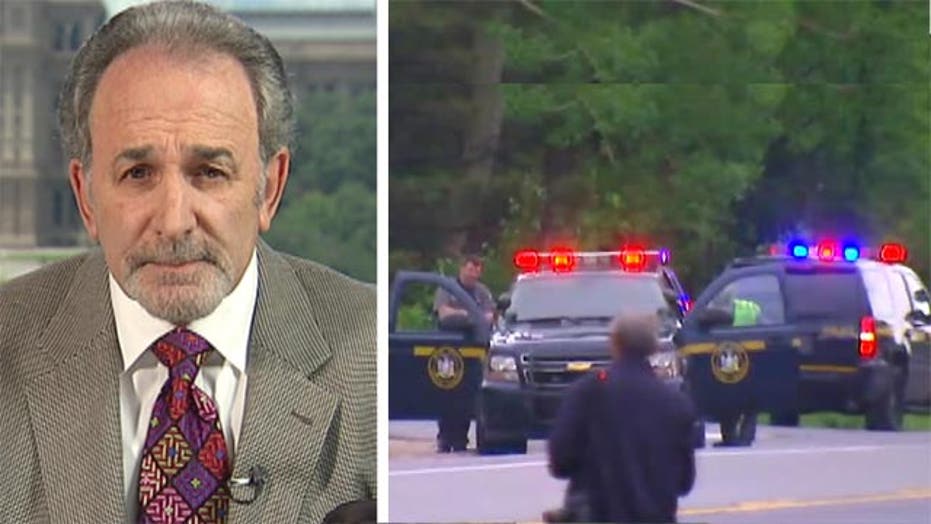 Ex-US marshal on catching fugitives: 'Just a matter of time'

A small town in upstate New York became the focus Thursday of a massive manhunt for two convicted murderers who escaped almost a week ago from a maximum security prison five miles away.

Authorities, including the FBI and U.S. Marshals Service, descended on Cadyville, N.Y., after bloodhounds picked up a strong scent and police found evidence the two inmates, Richard Matt, 48, and David Sweat, 34, had bedded down near Kennedy and Bart Merrill roads, according to the Press-Republican newspaper. Numerous people in Cadyville received automated phone calls from Homeland Security overnight, urging them to lock their doors and turn on their outside house lights, the newspaper reported.

The area police are searching is described as extremely difficult terrain.

Late Wednesday, New York State Police closed a section of Route 374 — portions of which remained shut down east of Dannemora on Thursday as police hunted for the killers who used power tools to escape from Clinton Correctional Facility in Dannemora sometime after 10:30 p.m. Friday night.

"Best lead by far. We are close. This could be it," police sources told the Press-Republican Thursday morning.

Brian Thew, whose 119-acre property is being searched Thursday, told FoxNews.com authorities are focused on a thick swamp where Thew said he once, "sunk up to my waist in quicksand."

Thew and his family hunkered down in their home overnight, with all doors locked and their outside lights on.

Authorities are pursuing hundreds of leads, including one some 400 miles away in Philadelphia, where a cab driver told police he may have driven the two inmates to an Amtrak station at 4:15 a.m. Thursday morning. Philadelphia police called the reported sighting unfounded.

The focus of the search shifted back to the area between West Plattsburgh and Dannemora on Wednesday.

Using power tools, Sweat and Matt cut through a steel wall, broke through bricks and crawled through a steam pipe before emerging through a manhole in the street outside the 3,000-inmate Clinton Correctional Facility in far northern New York, about 20 miles from the Canadian border.

The breakout was not discovered until early Saturday, giving Sweat and Matt a likely head-start of several hours. The two were last seen during a prison inspection at 10:30 p.m. the previous night.

On Wednesday afternoon, New York State Police Superintendent Joseph D'Amico said, "I have no information on where they are or what they're doing, to be honest with you" during a press briefing at the maximum-security prison.

Authorities speaking at the press conference, including the New York and Vermont governors, said they were expanding the search after investigators learned the inmates had talked before last weekend's breakout about going to neighboring Vermont.

"We have information that suggests they thought New York was going to be hot. Vermont would be cooler, in terms of law enforcement," said Vermont Gov. Peter Shumlin, who spoke along with New York Gov. Andrew Cuomo. He and other officials would not say how authorities learned that information.

Vermont authorities also are patrolling Lake Champlain and areas alongside it, Shumlin said. Cuomo urged the people of Vermont to be on the alert and report anything suspicious, warning: "Trust me, these men are nothing to be trifled with."

D'Amico also said that a prison employee — identified in news reports as Joyce Mitchell, a training supervisor at the prison tailor shop — had befriended the killers and "may have had some role in assisting them."

He would not elaborate. No charges have been filed against the 51-year-old Mitchell, who was treated at a local hospital for an undisclosed illness in the days after the escape.

More than 450 federal and state law enforcement officers were taking part in the search, including customs agents, federal marshals and park rangers. The killers' mugshots have been put on more than 50 digital billboards in New York, New Jersey, Massachusetts and Pennsylvania, state police said, and a $100,000 reward has been posted.

Sweat was convicted in the 2002 killing of a Broome County sheriff's deputy and was doing life without parole. Matt was serving 25 years to life for the murder of his boss, businessman William L. Rickerson, in 1997.

Matt had twice tried to escape from prison, once successfully. Matt's 23-year-old son told the Buffalo News his father escaped in 1986 from New York's Erie County Correctional Facility, where he was serving a year for assault. He scaled a wall and gate topped with razor wire that slashed his forearms and eluded authorities for five days before he was captured at a family apartment in Tonawanda, N.Y., near Buffalo, his son, Nicholas Harris, told the newspaper.

Matt later served three years in the 1990s for attempted burglary and was released in 1997. That same year, Matt fled to Mexico to avoid arrest for the torture, murder and dismemberment of his 76-year-old boss in Tonawanda. After killing another man outside a bar in Mexico, he was thrown into a Mexican prison where he tried to escape, climbing to the roof of the prison before he was shot by guards, according to Harris.

"This guy has bullet holes on his body. He's been shot like nine times. It's like they can't kill him," Harris told the Buffalo News.

Matt spent several years in the Mexican prison in the beating death of an American man outside a bar. In 2007, he was extradited to the U.S. to stand trial for the murder of his boss, whose torso was found in the Niagara River. Matt was considered so dangerous that police snipers were assigned to the roof of the courthouse in case he tried to flee during his trial in Niagara County and Matt was required to wear an electric stun belt. He was sentenced to 25 years to life with no chance of parole before 2032 for the murder.

Sweat was sentenced to life in prison after he and another man killed Kevin Tarsia, a Broome County, New York Sheriff's Deputy, firing 15 rounds into him after Sweat broke into a Pennsylvania house and stole rifles and handguns.

Despite their dangerous pasts, Matt and Sweat were placed in the prison's "Honor Block," which allowed them to do factory work inside the prison, earning up to 65 cents an hour for sewing and stitching clothing. Mitchell, their alleged accomplice, reportedly worked as a seamstress at the facility.

In Dannemora, Barbara McCasland told the Associated Press officers had asked to search her home, but she told them no.

"I'm pretty battened down here," she said. "My windows are locked and everything."

As the manhunt dragged on, she said she was getting worried: "I wasn't in the beginning, but seeing that they've been out there so long, I am a little nervous."

Many in the prison town greeted the return of the searchers with a shrug. Many suspect Sweat and Matt are long gone and they are past any danger.

"I'm not worried about it," Jackie Trombley said.

Referring to the searchers swarming the area, she said: "We've got these guys down the road. They're everywhere, so it really doesn't bother me."