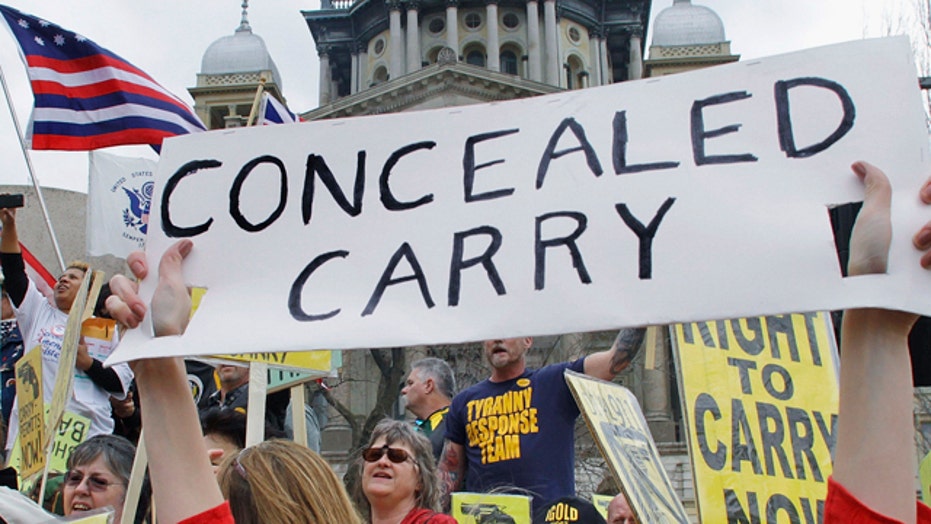 Do Americans have the right to carry concealed weapons?

Gun owners are flooding the sheriff's offices in two California counties with applications for concealed weapon permits following a bombshell ruling two weeks ago by a federal appeals court that citizens need not justify their requests.

Orange and Ventura counties have dropped the "good cause" standard for issuing conceal carry permits after the requirement was struck down  Feb. 13 by the U.S. 9th Circuit Court of Appeal. A three-judge panel of the court ruled 2 to 1 that the Second Amendment bars California counties from requiring law-abiding gun owners who want to carry concealed firearms to demonstrate special, individualized needs for protection.

“We’ve received as many or more in the last week in a half than we did in the whole calendar year [of 2013],” OCSD Lt. Jeff Hallock told FoxNews.com by phone early Thursday.

He said Hutchens didn't wait for the decision to be further tested in order to "show respect to the court’s opinion while demonstrating her responsiveness.”

“For now, we’re going to accept applications with self-defense and/or personal protection as just cause,” said Hallock, adding that Hutchens is still encouraging applicants to submit a statement of good cause.

Similarly, in Ventura County, where officials also elected to immediately drop the "good cause" requirement, a tide of applications is expected.

“We’re certainly preparing for an influx of more applications,” Capt. Don Aguilar, spokesman for the Ventura County Sheriff’s Office, told FoxNews.com. “We’re getting calls from people who have questions about this.”

Aguilar could not say how many applications have come in since the ruling, but noted that 531 applications were received in 2013, with 123 being denied. There are currently 832 active permits in the county, he said.

Because the decision was not appealed to the full 9th Circuit by San Diego County Sheriff Bill Gore, the case now goes back to the U.S. District Court that originally heard it, with instructions to change the way gun permits are issued throughout the state in compliance with the ruling. A date for a hearing has not been set.

In other California counties, including San Diego County, where Peruta v. County of San Diego originated, and Los Angeles County, officials are waiting for the law to become final before changing the rules.

"Applications that seek a CCW permit under the self-defense standard set forth in Peruta v. County of San Diego will be processed in the order they were received should the decision of the 9th Circuit become final," the San Diego Sheriff's Office said in a statement. "Once the decision becomes final, applicants will be contacted by the Sheriff’s Licensing Division with instructions on how to complete the process."

The ruling was hailed by gun rights advocates.

“No one should have to wait until they are assaulted before they are allowed to exercise their fundamental right of self-defense,” Chris Cox, executive director of the National Rifle Association’s Institute for Legislative Action, said in a statement. “The U.S. Supreme Court has already affirmed our Constitutional right to keep arms, and today, the 9th Circuit Court of Appeals affirmed the right to bear arms. Our fundamental, individual right to bear arms is not limited to the home.”

But supporters of tighter gun control laws blasted the idea of relaxing laws restricting the carrying of handguns.

“The parents of Jordan Davis and Trayvon Martin, whose children were killed by licensed concealed-carry holders, could educate the court about the real dangers posed by this legal error,” Jonathan Lowy, of the Brady Center to Prevent Gun Violence, said in a statement. “We are hopeful that this mistake will be corrected by the entire court.”

Hallock expects the applications to continue to pour in. In 2013, the department received 580 concealed weapons permit applications, approving about 75 percent, he said. Hallock said in a typical year, about 80 percent of applications are approved. But with gun owners no longer required to state a need — such as carrying large amounts of money in the course of their jobs, or facing some sort of threat — gun owners who never bothered to apply are seeking permits.

Hallock said the flood of applications has “inundated” the department, which handles gun carry permits for the county’s cities, including Huntington Beach, Mission Viejo and Costa Mesa, among others. As a result, additional temporary staffers may need to be hired to handle the influx. The process, from receipt of the application to issuance, typically takes 4-8 weeks.

In order to qualify for a license to carry a concealed firearm, Orange County residents ages 21 or older must complete a background check, be of “good moral character,” complete a firearms training course and pay associated costs and fees.

“The course will be 4 or 16 hours,” the department’s website reads. “The training should not be taken until preliminary approval for the CCW license is granted and the applicant’s fingerprints are taken.”

Once granted, those with permits may not consume alcohol while armed, falsely represent themselves as a peace officer or be under the influence of any medication or drug while carrying, according to the policy.

The backlog of applications has already delayed the interview portion of the process, which is typically scheduled 2-3 weeks in advance. Interviews are now scheduled through December, said Hallock, who stressed that the ruling has yet to affect the issuance of any permits. As of last week, 906 active permits were in the county.

“We’ve yet to issue a permit for self-defense,” he said. “Those applications are just coming in.”