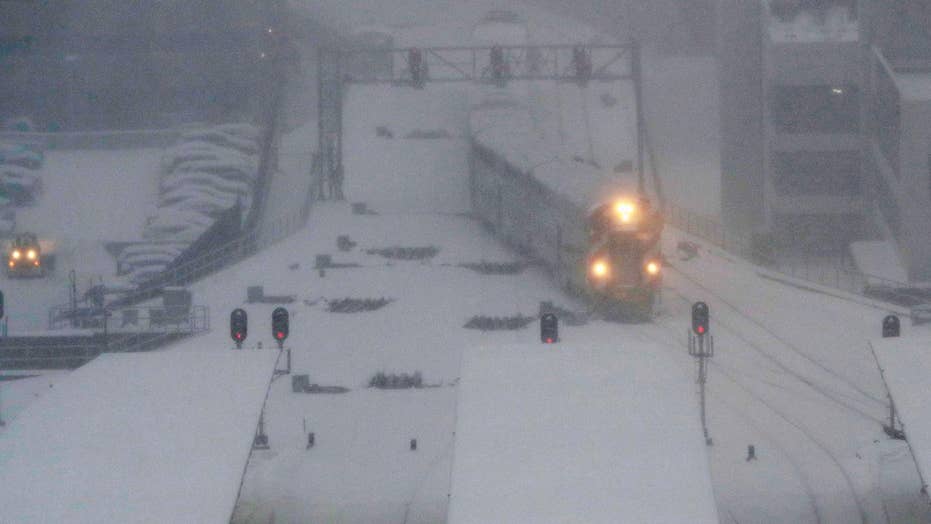 Heavy snow and frigid temperatures hit parts of the Midwest.

CHICAGO – Thousands of children in the Midwest got a rare snow day off school Friday as a winter storm moved through the Great Lakes region, dumping nearly a foot of the white powder in some places with more on the way.

Midwest residents often boast that they are well prepared for winter weather and school is rarely called off. But the threat of the largest snowstorm of the season prompted school districts in Chicago, Detroit and Milwaukee to cancel classes Friday. Schools across Nebraska and Iowa also closed or delayed the start of classes.

It was a great day for kids to go sledding, make snow angels and play with pets outside instead of reading, writing and arithmetic. Angela Lekkas took her children sledding in Chicago's Lincoln Park neighborhood.

"The kids couldn't wait to get out today," she said. "This is the first true snowfall of the season."

The storm that started Thursday evening in Iowa and Nebraska also created treacherous driving conditions and forced the cancellation of more than 1,300 flights in Chicago and Detroit. The National Weather Service issued winter-weather warnings and advisories and expects the snow to continue through Friday in Iowa, Illinois, Indiana and Michigan.

"It's too early quite yet to call it over," Chicago weather service meteorologist Todd Kluber said. "We still have several hours left of this heavier snow. Even after the heavy snow ends there still will be continuous cleanup needed."

In Chicago, Mayor Rahm Emanuel said the city was gearing up for more snow through the weekend after crews dealt with 6 to 7 inches overnight.

Chicago was forecast to receive as much as 14 inches of snow with Detroit expecting up to 9 inches.

As of Friday morning, the National Weather Service received reports of between 9 and 11 inches (23 to 28 centimeters) of snow over a 24-hour period in Fort Dodge, Iowa. Ten inches were reported in parts of northern Illinois and 8 inches in northern Indiana. Snow across southern and central Michigan ranged from 7 inches on the western side of the state to about 5 inches in the Detroit area.

Hank Stawasz was out shoveling his driveway by hand, clearing a path for the retiree to exit his home in the Detroit suburb of Livonia.

"It's part of living in Michigan," a smiling Stawasz said from underneath his Detroit Red Wings winter hat. "I saw the plows come by, so I figured I'd get a jump on it so I wouldn't have to shovel it when it's 4 feet high."

A section of Interstate 94 in southwestern Michigan was blocked after dozens of vehicles crashed. Michigan State Police said about 50 vehicles were involved in the Friday afternoon pileup in the highway's eastbound lanes just east of Kalamazoo. No information on injuries was immediately available.

Chicago Department of Streets and Sanitation Commissioner John Tully said 300 salt-spreading plows hit the streets late Thursday and would continue their work through the weekend.