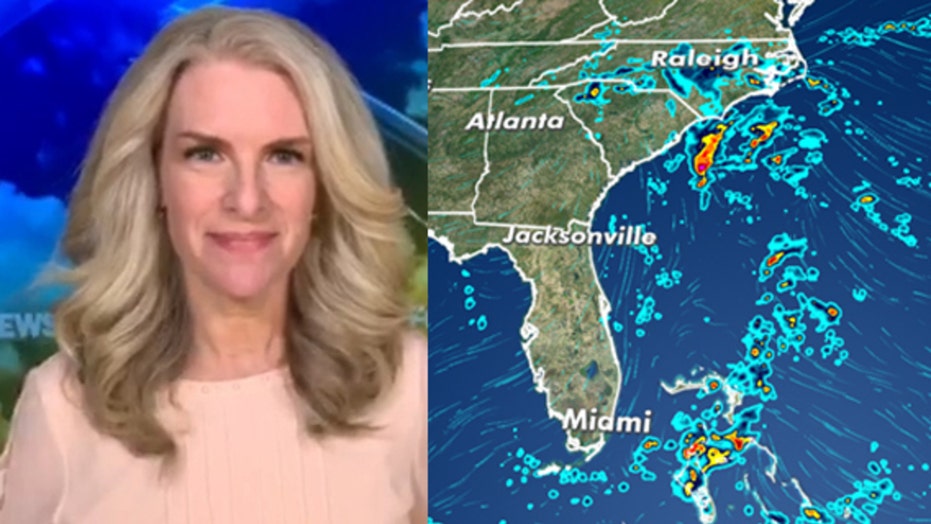 A stalled front along with a slow-moving area of low pressure is bringing heavy rain to parts of the Southeast and the Mid-Atlantic through Wednesday.

Several inches of rain and flash flooding will be a risk for North Carolina.

The heaviest amount of rain is expected over the eastern part of the state, where 3 to 5 inches could fall.

According to the National Weather Service's (NWS) Weather Prediction Center (WPC), a risk of flash flooding exists in the area.

A stalled front and slow-moving low-pressure system are forecast to bring several inches of rain to parts of the Southeast this week. (Fox News)

Another system known as a cut-off low over the Ohio Valley will work in tandem with the stalled front to allow for soaking rainfall in the region.

The highest amounts of rain are across portions of Eastern North Carolina through Wednesday. (Fox News)

In addition to the soaking rain, temperatures in the East will struggle to get into the low 70s on Monday.

On the other side of the country, cool and dreary conditions will stick around in the Northwest as more coastal rain and even some pockets of snow are expected in the higher elevations.

In between the disturbed areas of cool and damp weather, the heat is forecast to build into the Midwest this week.

The threat of severe weather exists Monday across the Upper Midwest before shifting into the northern Plains on Tuesday.

Fire danger remains critical for the Great Basin and Southwest on Monday, as temperatures are hot with dry and breezy conditions.

Some thunderstorms are possible across the Southern Rockies, but they are not expected to bring any beneficial rainfall, just the threat of lightning that could trigger more wildfires.

A long stretch of red-flag warnings is up from California's central Sierra Nevada to the central High Plains, according to the WPC.

Elevated to critical fire conditions are expected to stick around through the middle of the week, especially over the Four Corners region.