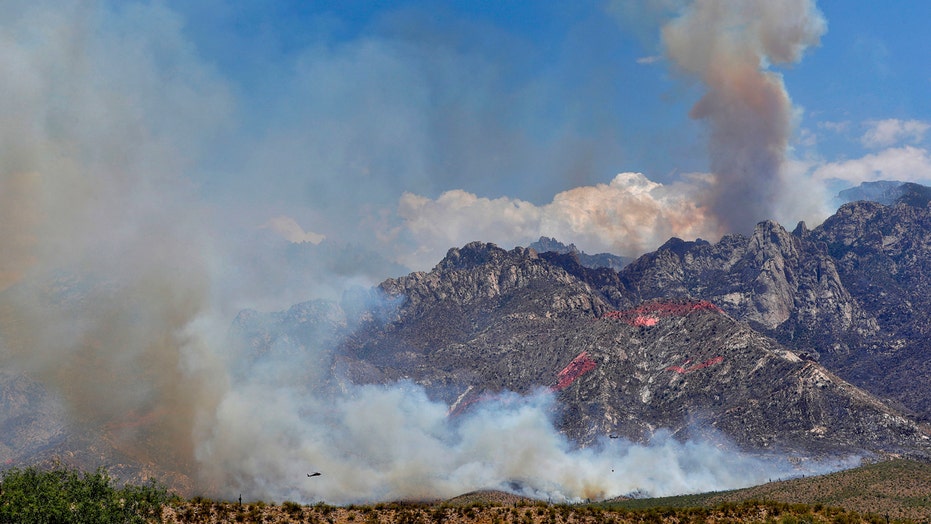 Crews in Arizona managed to gain ground on Saturday night against a wildfire burning in the southern part of the state, as critical fire conditions remain throughout the region.

Gusty winds, low humidity levels, and dry lightning will keep wildfire conditions elevated from the Southwest to the Southern Plains for the first half of the week.

Red flag warnings and fire weather watches are in effect for the region.

The National Weather Service's (NWS) Weather Prediction Center (WPC) said critical fire weather is possible in portions of the Four Corners states an well as the southern and central Plains.

Red flag warnings and fire weather watches are in effect for the Southwest into the Plains. (Fox News)

Conditions are expected to stick around for the first half of the week due to an upper-level trough that's developed over the Pacific Northwest.

In Arizona, the Bighorn Fire burning north of Tucson is now 11 percent contained after burning some 11,500 acres in a national forest. The blaze was started by lightning on June 5 and had led to the evacuation of several hundred residents last Thursday.

Many were allowed to return home by Friday, but told to remain ready to leave at a moment's notice.

Flames have been visible from Tucson at night, and smoke from the fire plumed over a suburb Friday morning. Later in the day, an air tanker was seen spreading red fire retardant over the flames.

The Bighorn Fire backdrops a community along the western side of the Santa Catalina Mountains, Friday, June 12, 2020, in Tucson Ariz. (AP Photo/Matt York)

Authorities have said southern Arizona's dry, hot weather and the steep, rocky topography have been the main challenges in fighting the fire. Friday was the hottest day yet for crews battling the blaze, with temperatures reaching 107 degrees in the afternoon.

In other parts of the state, fire crews have been busy over the weekend.

Firefighters battled a 100-acre wildfire in Phoenix on Saturday night after high winds fanned the flames, according to FOX10.

The fast-growing "Bush Fire" in the Tonto National Forest burned some 600 acres near the Sugarloaf Recreation area, causing Highway 87 to be closed, FOX10 reported.

On Friday, authorities closed the North Rim of the Grand Canyon due to a fire in the Kaibab National Forest. The nearly 3.5-square-mile fire has been burning since June 8 and its cause is unknown.

Severe thunderstorm threat over the Plains

The threat of severe weather is once again making an appearance on the Plains on Sunday.

The threat of severe weather exists again on Sunday across the Plains. (Fox News)

The NWS Storm Prediction Center (SPC) said there is a marginal to a slight risk of severe thunderstorms in the Northern Plains.

Isolated to scattered storms capable of producing both large hail and severe wind gusts may occur across parts of the Dakotas from Sunday afternoon into the evening.