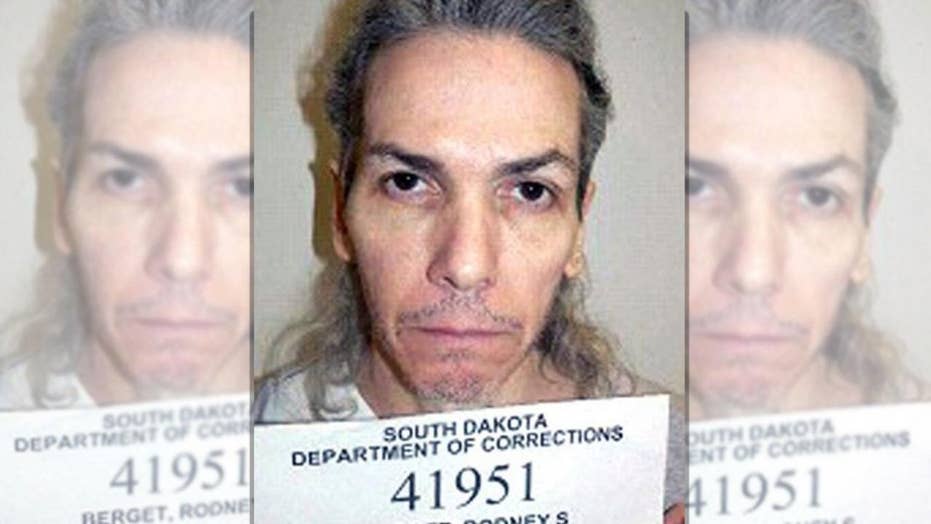 Death row inmate Rodney Berget cracked a joke about being late to his execution as he received the lethal injection.

A South Dakota inmate, who was executed Monday evening for beating a guard to death during a failed prison escape, used his final moments to crack a joke.

“Sorry for the delay, I got caught in traffic,” Rodney Berget, 56, said as he received a lethal injection of an undisclosed drug after the procedure was delayed hours while the U.S. Supreme Court weighed a last-minute legal bid to block it.

Berget, who killed Ronald “R.J.” Johnson in 2011 with a pipe at the South Dakota State Penitentiary in Sioux Falls. He was the state’s fourth execution since it reinstituted the death penalty in 1979.

Johnson was killed on his 63rd birthday and was nearing the end of a nearly 24-year career as a guard.

During the execution, Berget thanked people for their support and mentioned two by name.

“I love you, and I’ll meet you out there,” he said while appearing to give a peace sign with his left hand.

Berget was pronounced dead at 7:37 p.m. CDT, 12 minutes after the administering of the drug began.

Berget was serving a life sentence for attempted murder and kidnapping when he and another inmate, Eric Robert, attacked Johnson on April 12, 2011, in a part of the penitentiary known as Pheasantland Industries, where inmates work on upholstery, signs, furniture and other projects.

After Johnson was beaten, Robert put on his pants, hat and jacket and pushed a cart loaded with two boxes -- one containing Berget -- toward the exits. They made it outside one gate but were stopped by another guard before they could complete their escape through a second gate. Berget admitted to his role in the slaying.

Berget was the second member of his family to be executed. His older brother, Roger, was executed in Oklahoma in 2000 for killing a man to steal his car.

Berget’s mental status and death penalty eligibility played a role in court delays. Berget in 2016 appealed his death sentence but later asked to withdraw the appeal against his lawyers’ advice. Berget wrote to a judge saying he thought the death penalty would be overturned and that he couldn’t imagine spending “another 30 years in a cage doing a life sentence.”