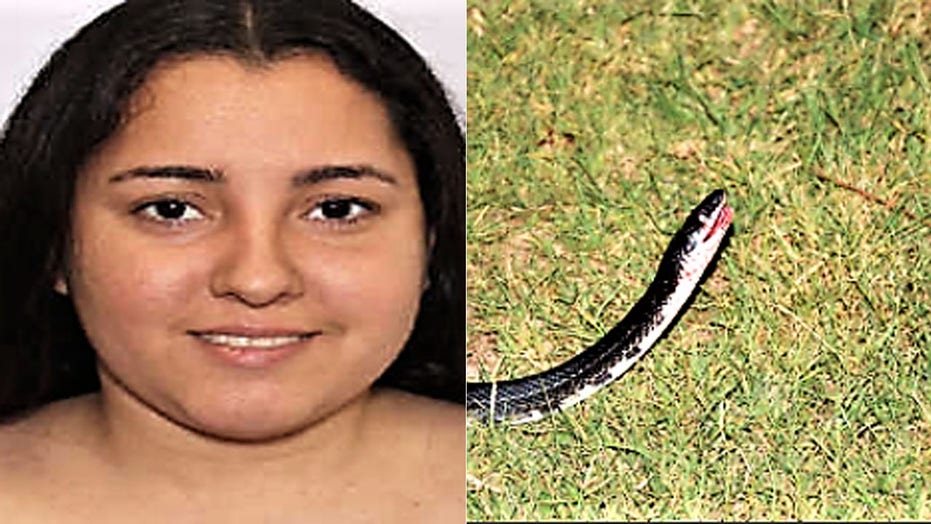 A bizarre carjacking in South Carolina on Friday -- that started with a snake being thrown at a woman -- ended in a chase and crash into another vehicle, according to police.

The Greenville Police Department said the incident happened around 8:25 p.m. in downtown Greenville when 29-year-old Hilmary Moreno-Berrios demanded a woman's keys before throwing a live, black snake at her.

"The bizarre incident garnered widespread community attention not only for the chase through the heavily-populated route the suspect traveled but also because Moreno-Berrios carjacked the Honda CR-V by throwing sticks and what turned out to be a live, non-venomous black snake at the victim," police said on Facebook.

Minutes after stealing the SUV, Moreno-Berrios was reportedly spotted by a police officer crashing through barricades set up for a pole-vaulting exhibition in downtown Greenville that weekend.

Hilmary Moreno-Berrios stole a vehicle after throwing a nonpoisonous snake at the driver, then crashed through barricades set up for a pole vaulting exhibition, according to police. (Greenville Police Department)

Authorities said she drove "recklessly" through the area, smashing into water barricades and causing damage to equipment set up for the Liberty Bridge Jump-Off.

Officers attempted to stop the 29-year-old, but she led them on a chase that ultimately ended when she struck another vehicle that was occupied by a mother and daughter, officials said.

The SUV that Moreno-Berrios allegedly stole after throwing a live snake at the driver. (Greenville Police Department)

Moreno-Berrios attempted to flee on foot, but was apprehended by police after resisting arrest.

Greenville Police said that the 29-year-old complained of an injured shoulder so she was taken to an area medical facility for treatment. Moreno-Berrios remained under a doctor’s care for psychiatric testing and evaluation through the weekend.

"Remarkably, no other injuries were reported," police said.

On Monday, the 29-year-old was charged with carjacking, malicious damage to property and five traffic violations. She was arraigned Monday morning and was in custody at the Greenville County Detention Center on a $25,000 bond, according to police.

The snake, which was alive and non-venomous, was released into the woods afterward by officers, FOX Carolina reported.