Fox News senior correspondent Laura Ingle has the latest on an increase in shark attacks in Long Island, N.Y. on 'Fox News Live.'

A shark bit a 16-year-old surfer near a Long Island beach on Wednesday as a flurry of shark incidents in the waters around New York continues.

The teen boy was paddling about 20 yards off Kismet Beach on Fire Island around 5:45 p.m. when a shark bit him on his right foot, the Suffolk County Police Department said.

While the teen suffered an approximate 4-inch laceration to his foot, police said he was able to walk out of the water on his own. No lifeguards were on duty at the time of the attack.

Saltaire Fire Rescue rushed the teen to Good Samaritan Hospital Medical Center in West Islip for treatment. No update on the surfer’s condition was immediately available.

A 16-year-old boy was bitten by a shark on his right foot while surfing in the waters off Kismet Beach on Fire Island on Wednesday evening. (FOX5 WNYW)

Police searched for the shark by helicopter, but the water was too murky to locate the sea creature, according to the department. Suffolk County Marine Bureau officers were continuing to search for the shark via boat.

The bite is the latest in a string of shark incidents to occur at Long Island beaches this summer.

Last week, a shark bit a 41-year-old surfer on his left calf about 12 yards from shore at Smith Point County Park in Shirley, the same stretch of water where a lifeguard was bitten by a shark during a training exercise on July 3. 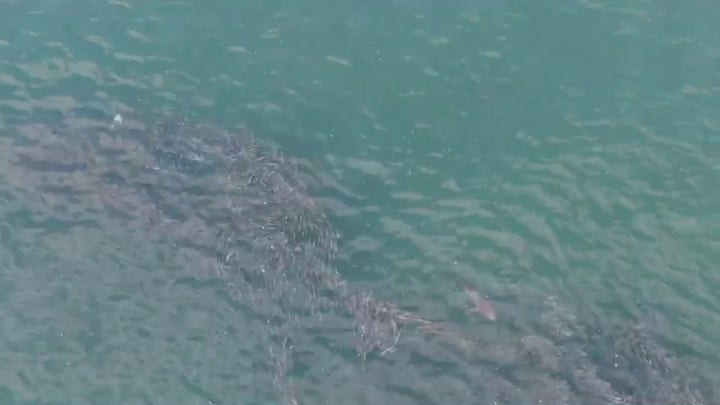 On Wednesday morning, a dead juvenile great white shark measuring about 7 to 8 feet in length washed up on Dune Road Beach in Quogue, but was pulled back out to sea before police could secure it.

The body of what is believed to be a dead juvenile Great White Shark washed ashore on the beach of the village of Quogue on Long Island early Wednesday. (Quogue Village Police Department)

Shark sightings were relatively rare in the region until recently. Experts say cleaner oceans, warmer waters and a resurgence of the bunker fish that sharks feed on are among the reasons for the growing shark population.

Meanwhile, Gov. Kathy Hochul on Monday called for heightened protocols and additional safety measures. She said police are "intensifying aerial and water patrols out of an abundance of caution," and urged people to stay calm.